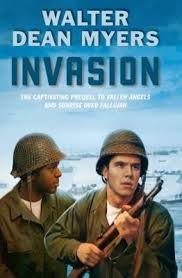 Invasion is the third novel in a loosely-connected series of war stories by Walter Dean Myers. Marcus Perry, one of the lead characters in this novel, is father to Richie Perry (Fallen Angels). In turn, Richie is uncle to Robin Perry of Sunrise over Fallujah. However, Marcus is not the main character in this novel; Josiah Wedgewood (Woody) is his hometown friend who fights in the infantry, and most of this book centers around Woody’s experiences with war. Invasion is set during the storming of Omaha beach and United States’ efforts to liberate St. Lo, a strategically important French city held by the Germans.   With every battle, more of Woody’s fellow soldiers are killed. The deaths take their toll and everyone has a different way of coping with the experience. Woody’s close friend Mink, for example, recites poetry to bring beauty to the very ugly situations they are in.  Ultimately, the city is liberated, but Woody is wounded as his infantry moves toward its next target.  Woody, Marcus, and the others have been changed by the war; how will they adjust when it is time to go home?

Invasion is a good book, although I didn’t enjoy it as much as Fallen Angels.  I am trying to figure out why this is so.  Invasion is shorter than Myers’ other war books; perhaps the story wasn’t as developed as it might have been?  Perhaps the story from Woody’s perspective is not compelling as Marcus’ story in a racially segregated army would have been?  One aspect I really did like was Myers’ author’s note at the end of the novel.  Myers talks about the process of interviewing veterans and his feelings about war; it is powerful writing.

Librarians should be aware that the action in this novel is graphic and realistic. The language is also explicit, but not gratuitous, considering the events of the book.