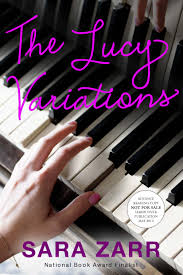 Lucy Beck-Moreau, a child piano prodigy, had it all: fame, fortune, and a piano career on the world’s stage that most can only dream about, but that was before her sixteenth birthday and the death of her grandmother.  Now, eight months after leaving the stage in Prague and quitting the piano forever, at least according to her grandfather, Lucy begins to re-examine her choices and the pressure talent places on a person as her ten-year-old, brother Gus (also a child prodigy) steps into Lucy’s previous life.  Through her relationship with Gus, her best friend Reyna, and Will, Gus’s piano teacher, Lucy begins to question her choices, the familial pressure placed on her and Gus because of their talent, and the path in which her life can go: a path without music or a path through it.  Sarah Zarr once again creates a realistic teenage character whose movements between questions, uncertainty, spontaneity, and rebellion ring true no matter one’s musical ability (the novel is sectioned with musical terminology).  Lucy’s struggles of finding herself will ring true for most readers.

Although The Lucy Variations was a starred title in almost every review journal and was highly praised, I did not love it.  I understand Zarr’s point in the story and recognize that she wrote another magnificent novel, but I struggled through many parts of it.  First of all, I struggled with Lucy’s relationships with both her English teacher, Mr. Charles, and Will, Gus’s piano teacher.  Please do not get me wrong: Zarr’s representations of these relationships is spot on and very well developed; my issue is that they are just uncomfortable to read because of Lucy’s age.  Zarr depicts Lucy as very mature, so her “feelings” make sense, but she is still sixteen, so there is the uncomfortable aspect of the story.  I felt this more with Will because of the development between Lucy and Will than I did with Mr. Charles.  Mr. Charles is a teacher crush; Will is much more because he shows interest in Lucy and her talent in a way that her family does not; they feel that Lucy needs to progress with her talent and use it as both means and end.  Will sees the “fun” in the piano and Lucy’s need for enjoyment through her talent.  I would have liked to have seen Will push this aspect of there “relationship” instead of the uncomfortable moments on Lucy calling him, meeting him for coffee, and attending a party at his home with a much older crowd.  I know Lucy is not a normal sixteen-year-old, but her relationship with Will should have been.  I think a more teacher-mentor-student relationship would have made the novel more impactful than the awkwardness and uncomfortable moments shared by Will and Lucy.  I did really enjoy Will’s influence on bringing Lucy back to piano; Zarr did an excellent job with this aspect and should have continued this portion.  Even though I did not love The Lucy Diaries, I did enjoy it very much as are my students.  They are able to see Lucy as a mirror of themselves (even though most of them aren’t very musical) and that is the most important aspect of YA literature.