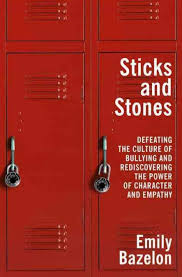 From Bazelon’s articles about bullying as a senior editor of Slate magazine comes this full-length, researched and readable book about the social side of the lives of teenagers.  After watching a growing national preoccupation with bullying (some of it rightfully presented, some of it falsely reactionary) Bazelon steps in to define what bullying is and what it is not.  She contends that teenagers often need to jockey for place in relationships, much of this they view as normal “drama”, and adults should view it as necessary growth to navigate work and school, now and later.  When this reasonable social aggression becomes skewed in favor of one side (all the power to one, all of the fear to another), it’s bullying.  Bazelon focuses on three teenagers: middle-schooler Monique, whose tormentors’ tactics led her to change schools and find relief in family and community support; Jacob, whose flamboyantly gay attitude makes him a regular mark for attacks, and whose parents successfully sue his school for violation of his civil rights; and Flannery, who Bazelon asserts is wrongfully blamed by the courts for the suicide of depressive, bullied classmate Phoebe Prince. She also maintains that although technology has changed the landscape for teens and adults, bullying hasn’t increased; only the tactics have changed, leaving long trails for perpetrators and victims.  It is we who have over-reacted.  She identifies unsuccessful zero-tolerance-style policies which she maintains do not make much sense in light of teenagers’ immature worldviews.  In the most useful section, she profiles successful programs used in schools to promote character and empathy in students.  Unfortunately, in “supporting” the victims, her own biases are clear; in attempting to enlighten with a new view, she may well oversimplify: Monique’s school was blind; Jacob’s school was homophobic; and Flannery was the victim of a witch-hunt.  Monique, Jacob, or Flannery have no need to question their actions or tactics; everyone else was at fault.  Rarely are such “all or nothing” attitudes realistic (a point she herself makes, then falls prey to).  She ends with FAQs about Bullying, Resources for Readers, notes, and glossary.  Recommended where awareness of the current bullying debate is desired.
302: Bullying Psychology and Prevention                                             Melissa Scott, Shenango High School