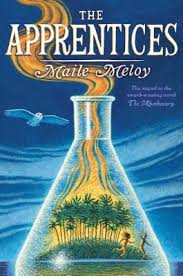 In her follow up to The Apothecary (2011), Meloy once again integrates historical fiction, mystery, magic, and little bit of mayhem.  Set in 1954, just two years after Janie first meets Benjamin, Janie Scott has returned to school in the U.S.   Continuing to develop her scientific knowledge and understanding of chemical reactions and atomic breakdowns, Janie is a star student at the elite Grayson Academy, that is until she is turned in for “cheating” and kicked out of school right when she’s about to make a breakthrough in her desalination experiment.  Meanwhile, Benjamin Burrows and his father are continuing their work against atomic development in the jungles of the South Pacific.  As Janie’s world and work begin to unravel, she realizes that she and Benjamin are not that far apart, yet she cannot connect to Benjamin in time to save him (and herself) as the evil Magnusson makes his move to change the world forever.

I loved this follow-up to Maile Meloy’s, The Apothecary.  Meloy does an amazing job of writing in such a way that the reader is fully consumed by the story and can easily place the setting, characters, conflict, and plot in a historical period.  This novel screams fantasy through the integration of magic and unrecognizable (at least for me) science, yet also is firmly placed in the Cold War period of U.S. history.  Her ease of integration between the history and fantastical is what allows the story to move freely, quickly, and easily.  Meloy swiftly integrates new characters in this follow-up novel, yet it feels like they have been here all the time.  I hated Opal, the Magnussons, and Janie’s headmaster, yet quickly integrated Raffaello into the story as though he had been in the first.  And then there’s Pip; who doesn’t love Pip.

Although I would have liked to have seen more direct connections between Benjamin, Janie, and the science, I did enjoy how the characters and fantastical were connected.  I liked the back story of Jin Lo and learning about her mysterious past, but I wanted to see more integration with her story; it felt separated from the rest.  I also wanted to see more with Janie’s kidnapping and more back story for Magnusson and his “reign of terror” on the world.

Overall, I found The Apprentices a quick read and very interested.  I hope to see more of Janie Scott and Benjamin Burrows soon.