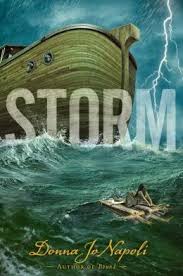 Sebah is the sixteen year old daughter of a Canaanite farmer and his wife.  The beans she grows with her brothers to sell at the market help support the family.  One day, while Sebah and her brothers are preparing beans for sale, it begins to rain.  No one thinks anything of the rain at first, but the rain grows stronger and doesn’t stop.  Sebah loses her family in the resulting flood and can only survive by climbing the tallest tree she can find.  Her tree attracts two other refugees: a small kitten she calls “Screamer” and a young man named Aban.  Aban claims Sebah as his wife and the three of them survive as well as they can, until a lightning strike forces them off the tree and onto a handmade raft.  Sebah watches helplessly as Aban grows weaker.  When their raft gets caught on a rope going up to a great ship, she decides to climb the rope and becomes a stowaway on Noah’s Ark.

Sebah sneaks into a cage with two bonobos and lives in the shadowed corners of their pen.  During her time as a stowaway on the ark, she comes to know Noah’s family and feels their hopelessness at being stuck on the ark.  Sebah is also carrying Aban’s child and will one day give birth on the boat.  This story follows the human and animal inhabitants of the ark through forty rainy days (and the three hundred plus days it takes for the water to recede from the Earth).  After some time on the ark, Sebah meets Og, another stowaway, who becomes her partner and adoptive father to her child on the new Earth.

This was a fascinating novel.  It provided a glimpse into the life of a regular family living in Biblical times and gave new depth to the story of Noah.  Noah and his family members, like families throughout time, have distinct personalities and experience conflict. The author also manages to give the animals in this novel their own characteristics/behaviors.  The portrayal of the bonobos was especially multi-faceted; these primates play, express sadness and anger, and mate (a lot).  Sebah, the center of the novel, is a caring young woman.  She is not particularly religious, but she has a nurturing soul; she even grows seedlings in the animal dung found on the ark.  The novel talks about things like sex and childbirth in a matter of fact (but not detailed) way.  For example, Aban forces himself on Sebah sexually because it is the way a man would claim a woman as his wife at that time.  These elements could cause this book to be controversial with certain audiences.  Storm might also be controversial with those who view the Bible  as the literal word of God, since Donna Jo Napoli does take liberties with the Noah’s Ark story.   Teens will see themselves in Sebah, however, with her resourcefulness and willingness to fight for her family.  This book is highly recommended.