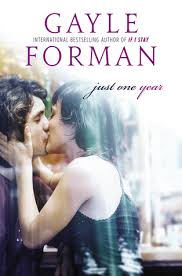 Picking up not from where Just One Day ends, but instead from the middle of the book when Allyson awakes to find Willem gone, Just One Year is the story of Willem’s trials and tribulations (and lots of travels) following his day with Allyson (i.e. Lulu) until her return to his home in Amsterdam one year later.  The novel opens as Willem awakes in Paris the morning after his day with Allyson to sirens, bright lights, and people asking his name.  He does not know where he is, but he knows he was doing something prior to ending up in the hospital; he just does not know who or with whom.  As his memories return, Willem realizes that he’s left Lulu alone and must return to her, but he cannot remember where he left her, so he begins his quest to find Lulu with Celine, who is useless, and ultimately find himself.  As Willem continues traveling the world, (Paris, home to Utrecht, The Netherlands, to Deauville, France, back home to Utrecht, on to Cancun, Valladolid, and Merida, Mexico, home to Mumbai, India (where he stars in a movie) with Yael, his mother, and finally back to Amsterdam), he is not only looking for Lulu and double happiness, but forgiveness and closure from the death of Bram, his father, and the loss of his relationship with Yael, his mother; something that he could not find standing still.  Through his travels and those he meets along the way, (Kate, the Ruckus theatre director and cofounder, his friends back in The Netherlands, Prateek, Yael herself, and finally Daniel, his uncle) Willem is able to reconnect with himself, and recognize that loss is not the end, but the beginning towards discovery, which Forman reconnects for us from Just One Day with a production of Shakespeare’s As You Like It.  “There’s a difference between losing something you knew you had and losing something you discovered you had.  One is a disappointment.  The other is truly a loss.  I didn’t realize that before.  I realize that now” (89).  Although this sequel to Just One Day, may disappoint readers who wanted the story to begin where the first one ended (with Allyson back in Amsterdam at Willem’s door), it will not disappoint readers who fell in love with Willem in just one book.

I have to admit that after finishing Just One Year (and while reading it), I wasn’t sure what to make of this follow up.  I loved (I can’t express it enough) Just One Day (I love Gayle Forman; she totally  rocks, and is so humble about her writing) and her previous novels If I Stay and Where She Went.  In Where She Went, I fell in love with Adam and was expecting the same with Willem, but I didn’t.  I wanted Just One Year to pick up where Just One Day left off, so when it didn’t I was disappointed.  I wanted the epic love story between Allyson and Willem, but instead it felt like a story of a whiny rich-kid who can’t accept anything, which I know it wasn’t, but felt like at times.  I understand the point of the second novel to develop Willem and his story, but it read more as a companion novel than a sequel.

During a book club discussion of Just One Year (we loved Just One Day so chose this novel with great anticipation), all of the students had similar thoughts, essentially “What just happened?”  They enjoyed the travels and descriptions of the places and characters Willem met (especially Prateek, we all loved him), but we could not figure out why Forman chose this route for the novel.  It did get us thinking, so perhaps that was her intent.  All we can hope for is that this becomes a trilogy (perhaps Just After or The Next Day; maybe even Just Met) because we all need to know what happens with Allyson and Willem.  Although, we all agreed that the end was very touching as Willem thinks of Bram’s story of meeting Yael and just kissing her, and then he kisses Allyson.

Finally, I want to leave you with one of my favorite quotes from the novel.  “It was just one day and it’s been just one year.  But maybe one day is enough.  Maybe one hour is enough.  Maybe time has nothing at all to do with it” (303).