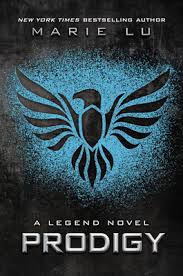 Lu, Marie. Prodigy: A Legend Novel. New York: Putnam Juvenile, 2013. 987-0-399-25676-9. $17.99. 374p. Gr. 8 and up.
Marie Lu continues the action where Legend concluded.  Day and June have managed to escape the Republic and the General and are trainbound to Low Angeles.  They intend to seek aid from the Patriots, and convince them to help Day find and rescue his brother.  Razor, the Patriot leader, has other plans for them.  When the Elector Primo suddenly dies and his son takes his place, the Patriots see an opportunity to spark a rebellion.  June will return to Denver and work with the new Elector.  She will participate in the Patriots’ plan to assassinate him, and Day will pull the trigger.  As June becomes close to Elector Anden, she realizes how different he is from his father and how much he needs her help and Day’s to create a new regime for the people.  If only she can message Day in time to thwart the plan.Romance between Day and June escalates and long distance creates tension as well.  Trust becomes an issue on their long-distance relationship as Tessa, who has always been like a sister to Day, reveals her affection for him and Anden begins to fall for June.  The two continue to alternate the narration keeping the reader on the edge of his seat trying to figure out who’s telling the truth and who’s the double agent.

Whenever a student walks into my library excited to tell me about a book she liked, chances are I have to read it, too.  One of my eighth graders introduced me to the Legend Trilogy.  Admittedly, she doesn’t always like to read but found herself unable to put this book down.  Now I recommend it to readers who are looking for something along the lines of Matched or Divergent. 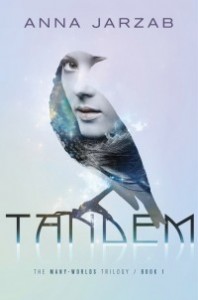 Jarzab, Anna. Tandem (Many Worlds Book 1). New York: Delacorte Press, 2013. 978-0-385-74277-1. 431p. $15.34. Gr. 7 and up.
Sasha’s parents were tragically killed in an accident when she was young, so she lives with her grandfather.  Ever since she has led a typically unremarkable life with a unrelenting feeling that she doesn’t truly belong.  When the cutest boy in school, Grant, asks her to the prom, she almost can’t believe her good fortune.  Too bad he’s a young man by the name of Thomas from a parallel universe on a mission to kidnap her.  Once they arrive in Aurora, Sasha learns she is an analog, or counterpart to the Princess Juliana.  The princess was recently kidnapped, and Sasha must take her place and marry Prince Callem in order to prevent a war between his country and hers.  If anyone will discover her true identity, it would be the Queen, Juliana’s stepmother.  In the midst of mystery and conspiracy, romance blooms.  While Thomas has not been completely forthcoming with the plans or his background, Sasha can’t help but begin to fall for him.  Prince Callem has also developed a fondness for Sasha, who he believes is the princess.  As the truth unravels and secrets are revealed, the General of Aurora has different intentions for the analog and Thomas, one entwined with a universal war looming in the near future.

Sasha is a strong, delightful character.  The love triangle will keep readers interested, even through the scientific explanations of the eccentric scientist.  The surprise ending will have readers impatiently anticipating the next installment.