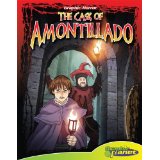 Poe, Edgar Allen. The Cask of Amontillado (Graphic Horror) adapted by Joeming W. Dunn. 978-1624020155. Minneapolis, Magic Wagon/ABDO: 2014. $28.50. 32p. Gr. 3-6.
The Edgar Allen Poe tale of the same name has been adapted into an easy to understand Graphic Novel form that is simple and fun to read. The tale retains Poe’s undertones and dark nature despite its adaption to a simpler form. The story follows Montresor telling the tale of how he got his revenge on Fortunado. After being slighted Montresor planned and waited for his revenge, luring in Fortunado with a false friendliness. Montresor leads a drunk Fortunado deep into Montresor’s catacombs with the promise of the great Amontillado wine. Leading Fortunado to the deepest of rooms Montresor locks him up and builds a wall to seal him in, which remains undisturbed to the end. The story is a bit dark, as all of Poe is, and one should consider both the dark subject matter and the depiction of merciless revenge before recommending it to some of your youngest readers. Those who like and can handle spooky stories will love it.
741.5 Graphic Novel/Horror/Easy reader
Matthew Dickinson, Conestoga HS senior and intern at Plymouth Meeting Friends School

Blackwood, Algernon. The Wendigo (Graphic Horror) adapted by Vincent Goodwin. 978-1624020186. Minneapolis, Magic Wagon/ABDO: 2014. $28.50. 32p. Gr. 3-6.
In a spooky tale adapted from Algernon Blackwood’s writing a boy named Simpson faces the dangers of the legendary Wendigo after his hunting trip goes awry. When Simpson’s partner Defago disappears under frightful circumstances Simpson investigates only to be attacked. Simpson flees and returns with the rest of the hunting party to find the disheveled Defago rambling and warped. Defago is changed, and he professes of meeting with the Wendigo in the woods and shows signs of turning into a Wendigo. The tale ends with the rest of the party finding Defago dead in the morning of exposure. The novel is easy to follow, but due to its scary subject matter one should not recommend it to children prone to nightmares.
741.5 Graphic Novel/Horror/Easy reader
Matthew Dickinson, Conestoga HS senior and intern at Plymouth Meeting Friends School

Holm, Jennifer. Babymouse #18: Happy Birthday, Babymouse, 978-0307931610. New York: Random House Books for Young Readers, 2014.  $6.99. 96p. Gr. 1 – 6.
In the 18th installment in the series Babymouse has her birthday party on the same day as her classmate Felicia’s. Babymouse’s plans for a perfect party are threatened by a string of bad fortune and her party is a pale joke in comparison to Felicia’s great celebration. Babymouse is upset only to be comforted the next day by her friends when they throw her another party that turns out to be just perfect. Babymouse fans won’t want to miss it!
741.5 Graphic Novel/Easy reader
Matthew Dickinson, Conestoga HS senior and intern at Plymouth Meeting Friends School 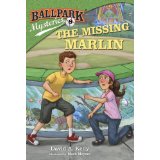 Meyers, Mark and David A. Kelly. Ballpark Mysteries #8: The Missing Marlin. 978-0307977823. New York: Random House Books for Young Readers, 2014.  $4.99. 112p. Gr. 1 – 3.
In the 8th book of the Ballpark Mysteries cousins Kate Hopkins and Mike Walsh must deal with missing fish and mysterious goings on at the Marlin’s stadium. The series is written for younger, emerging readers and has pictures interspersed throughout to help them follow along. With both sports and mystery tie-ins this book is great for kids at early reading levels who enjoy mystery or baseball.
Fiction/Easy reader
Matthew Dickinson, Conestoga HS senior and intern at Plymouth Meeting Friends School 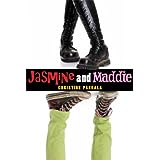 Pakkala, Christine. Jasmine and Maddie. Honesdale, PA: Boyds Mill Press, 2014. ISBN 978-1-62091-739-8. 203 pgs.  $16.95. Gr. 3-6.
Jasmine has just lost her dad and her mother is now working two jobs as they make a new start in Connecticut. Despite these changes she is fitting in at her new school but hides the fact that they are living in a trailer court. Maddie used to have a best friend and they played soccer together. This year Maddie does not make the soccer team and she feels pressure to be perfect like her older sister. How is it that Jasmine and Maddie become friends and what happens when they switch rings: Jasmine’s mother’s promise ring from her husband and Maddie’s grandmother’s ring that her sister inherited?  English class is a feature in the novel as Jasmine displays a strength with poetry where she displays talent to DD (dig deeper) with meaning in her work. They are studying GAP (Great American Poets) and her favorite becomes Emily Dickinson. American poets, I AM poems and poetry cafes are extension activities to try with this book.
Fiction, Families, Friends                  Beth McGuire Wendover Middle School 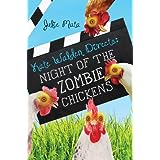 Mata, Julie. Kate Walden Directs: Night of the Zombie Chickens. New York: Hyperion, 2014. ISBN 978-1-4231-9459-0. 288 pgs.  $16.99. Gr. 3-7.
Life was ideal before Kate moves with her mother, father and younger brother from their city house in walking distance from her best friend since first grade, Alyssa, to a five acre farmhouse so that her mother may pursue of her dream to raise free range organic chicken. Kate is trying to make the most of the situation by having the chicken part of her latest film project while involving her father, brother, Alyssa and many other people in town with the finest fake blood she can concoct for the zombie scenes. Things started to get even more painful when she visits her orthodontist and then finding her mom as a speaker for national career week at school only adds embarrassment. Then Alyssa is becoming closer friends with Lydia, aka the MPG (Most Popular Girl). When Lydia teases Kate, Alyssa does not come to her defense and Kate is crushed. The school is abuzz over the upcoming school play Annie and the coveted red wig from New York City that the lead will wear. Can Kate complete her movie without Alyssa by her side and will she make new friends? Could Kate possible have a script in her mind using the famous red wig to give her revenge on Alyssa for abandoning her? Read to find out how the rest of the story and how Night of the Zombie Chickens unfolds. Students with interest in film making will also find comfort with the different film terms throughout the novel.
Friends, Farming, Siblings                 Beth McGuire Wendover Middle School

Thomson, Jamie. Dark Lord: School’s Out. New York: Walker Books, 2014. ISBN 978-0-8027-3522-5. 371 pgs.  $16.99. Gr. 3-7.
Dark Lord: School’s Out is the sequel to the Roald Dahl Funny Prize novel Dark Lord: The Early Years (Walker Books, 2012). Dirk Lloyd is struggling as a twelve year old boy in foster care as opposed to his previous grandiose stature of a tyrannical leader as The Dark Lord. Times become even more perilous as Dirk and his foster brother Christopher attempt to develop a creepy cell phone to connect with Sooz as she is in the other realm. Dirk is confused as to why a nanny named Dumpsy Deary was hired to look after him. As Sooz has the Dark Lord’s ring, she sticks to the idea that she is betrothed to the Dark Lord but she runs things with much more peacefully putting an end to slavery and reaching for treaties instead of war making Dirk jealous and ready to return back.  Dirk and Christopher work together to find themselves able to help Sooz, but will each return to their proper home? The novel is told in five parts including twenty nine full page sketch illustrations and assorted newspaper inserts to add different viewpoints to the story.
Fantasy, Friends, Humor               Beth McGuire Wendover Middle School