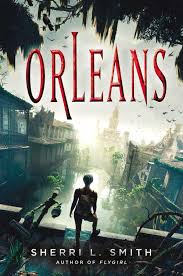 Orleans is set in New Orleans in the year 2056.  Following a series of devastating hurricanes,  each progressively worse than Hurricane Katrina, the Gulf Coast states have been sealed off from the rest of the United States ( Outer States).  A new disease called Delta Fever has killed thousands of people and left almost all survivors as carriers of the disease.  A new society has emerged with tribes formed by blood type.  People with O positive (OP) and O negative (ONeg) blood are hunted by the other tribes for transfusions that will help them stay alive.  Fen de la Guerre is a fifteen year old girl who is a member of a large and stable tribe of OPs.  Fen’s world isn’t safe for long; her tribe is attacked and its leader dies in childbirth.  Fen takes the infant (“Baby Girl”) and leaves the remains of her tribe to find a way to get the pure- blooded baby to the Outer States.

Along the way, Fen meets Daniel, a scientist from the Outer States.  Daniel has lost a brother to Delta Fever and is desperate to find a cure.  His research seems only to have resulted in a vaccine so strong it kills those it is administered to.  Daniel has gone to the Delta States to find out what he is doing wrong.  When Daniel and Fen meet, Fen’s mission ultimately becomes his own; they must get Baby Girl to the Outer States before she is murdered for her still-pure blood.

Orleans is one of the most unique novels I’ve read in a long time.  Students will either love it or hate it.  Fen speaks in a local dialect called “Tribe”, which is very distracting at first.  After you become engaged in the book, Fen’s speech is an important part of the story.  This book is NOT a romance; readers looking for a love story between Fen and Daniel will be disappointed.  The ending is also unclear.  Daniel is able to smuggle Baby Girl over the wall to the Outer States, but it’s difficult to tell what happens to Fen.  Personally, I really enjoyed the novel, since it was so different from anything I’ve read lately. It paints a vivid (and possible) picture of New Orleans’ fate, given the increasing severity of hurricanes in our world.  Finally, Fen is a truly remarkable and memorable character; it’s worth getting to know her. 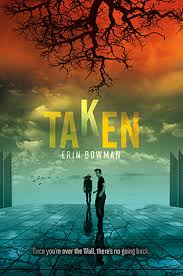 Gray Weathersby lives in Claysoot with his brother Blaine, but not for long. Blaine is about to turn eighteen and every male is taken from Claysoot on their eighteenth birthday. The citizens call the taking of the men “heists.” Men who try to climb the wall to escape the heist are sent back and burned beyond recognition. What lies on the other side of the wall, though, no one seems to know. Maude, the town elder, has the most information, but what she shares and what she knows differ; she knows a great deal more than anyone suspects. After Blaine’s heist, Gray discovers with the help of Emma, the daughter of the Clinician, that he is actually Blaine’s twin, and that the Heists don’t happen automatically.  It is a power larger than the townspeople that gains information about the birth dates and uses that information to perform the heists. After Blaine and Gray were born, their mother hid Gray for an entire year to prove that the heist was preventable, but sadly she did not live to see her plan work. Now Gray needs answers, and the only way to get them is by jumping the wall. It is certain death, but he jumps anyway, and Emma comes with him. The truth is more important than their lives. They are rescued by some of “The Order” officers and taken to Taem, where Frank is the leader. Along the way they see signs for Harvey Maldoon being a traitor, and they want him back alive. He also gets to see his brother Blaine, alive and well and training for The Order. Things aren’t adding up for Gray; he witnesses a member of The Order murder a man for taking water when it was not his day.  He escapes by hiding with a team that goes on a mission to seek out the Resistance. They are ambushed, and Blaine is hurt badly. Gray bandages him up as well as he can and drags him on a tent through the woods. He is in search of Mt. Martyr, the compound of the Resistance forces. When they get to Mt. Martyr, they are dragged in for questioning by Bree, a girl about his age. They have to pass tests in order not to be killed. The twins’ father is one of the leaders of the Resistance. Frank has big plans for the Rebels, he has an airborne virus that he developed and has tested on prisoners-they get sick within two days and die in a few weeks-the only vaccine is in Taem. The Resistance needs the vaccine to survive, so an expedition is planned. There are more questions left remaining, hinting at a sequel.

This book is really just for pleasure, but I could not wait to pick it back up again. Give this to any student who loved The Maze Runner series, or the Matched trilogy. There are some mature situations, so I do not recommend it for anyone under grade 9.