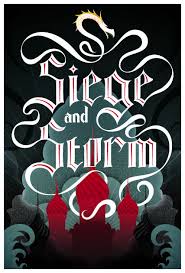 Following their escape from The Darkling and The Fold at the end of Shadow and Bone, Alina, the Sun Summoner, and Mal, her best friend and member of the First Army, are fleeing for their lives in Novyi Zem.  After weeks of looking over their shoulders in fear, Alina slips with her powers, and her  new feeling of safety is quickly stolen when The Darkling appears and captures them.  As the connection between Alina and The Darkling, due to Morozova’s Collar, increases, Alina realizes she will never truly be able to escape his power over her.  That is until the pirate, Strumhond, hired by The Darkling to carry Alina and Mal back to Ravka turns on The Darkling and claims the prisoners as his own.  As Alina and Mal learn that Strumhold truly is their ally, Alina’s power grows as she takes a second amplifier, the sea whip’s, scales and learns that the legend of Morozova is true.  Now it is up to Alina to find Morozova’s third amplifier, the firebird, and defeat The Darkling, as their bond from Morozova’s amplifier only multiplies as Alina gains strength.  Bardugo once again captivates readers through imagery of Ravka, The Darkling, and the power of magic, while solidifying realistic relationships and conflicts that provide a basis for the fantasy.

This is a fabulous series for fantasy and non-fantasy lovers alike.  For me, the relationship between The Darkling and Alina is like a raw version of Voldemort and Harry Potter.  Good vs. Evil.  But it is also so much deeper.  Bardugo transfixes readers into the relationships, places, characters, and conflicts, without them ever realizing it (much like Harry Potter).  Her story is amplified by her use of language to establish a classic piece of YA fantasy literature.  I could not put this novel down.  At no point does it lack for action, adventure, romance, and amazing story.  This is truly a trilogy for all readers and all libraries. I cannot wait to read the final chapter, Ruin and Rising.