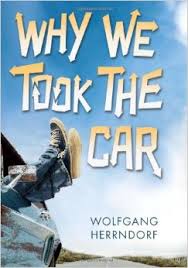 Any way you look at it, Mike Klingenberg is pretty boring. He doesn’t have many friends, and he doesn’t have a chance at getting the girl of his dreams, Tatiana, to ever take notice of him. But as boring as Mike is, Tschick is pretty unpopular too, for different reasons. Tschick is a newbie, but his clothes aren’t quite right and he has yet to stay awake for an entire class. When neither of the boys are invited to Tatiana’s birthday party when everyone else is going, Tschick hijacks a car and picks up Mike to crash the party. But why stop at the party when there is the rest of the autobahn to travel? Suddenly, the boys aren’t so boring and unpopular as they meet new friends, get shot at, wind up in the hospital, and are chased by the police!
Realistic        Nicole Starner, Biglerville HS/Upper Adams MS
This is the first American translation of the German author Herrnorff, whose story of two boys trying to figure out life makes the reader laugh out loud. Readers will sympathize with Mike, whose dad is having an affair and whose mother is often traveling, but will enjoy the exploits he finds himself in. Perfect for the student who may not be the most popular but can enjoy a good adventure.