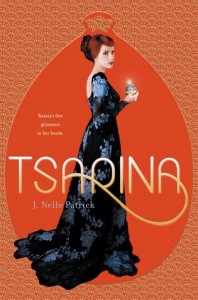 Tsarina takes place in Imperial Russia during the fall of the Romanov Family. Natalya Kutepova is the beloved of the Tsarevich, Alexei Romanov. She is not royal, but she is from a noble family; her father is the head of the Russian Military. She and Alexei have been in love for most of their teenage years. Alexei suffers from hemophilia and was always sickly when he was young. Gregori Rasputin created a Faberge Egg that contained protective magic for the Tsar and those he loved; he called it the Constellation Egg. When Alexei shows Natalya the Egg, he lets her in on two secrets that no one outside of the family knows; that it exists, and where it is kept. The Constellation Egg is the reason that Alexei is not sickly anymore. Turmoil is brewing in Russia. The Reds riot in St. Petersburg, and Natalya flees to free her friend Emilia, a noble. Emilia just wants to go to Paris until things settle down, but getting there turns out to be a problem. Natalya rescues Emilia from her house as the Reds are starting a fire that will end up consuming the house. They run away and end up at the home of their Tailor who promises to shelter them for the night and get them to the train station in the morning. The tailor’s nephew, Leo, picks the girls up, but rather than take them to the train station, he kidnaps them. Leo is a Red. This is just the beginning of this enchanting novel. Leo is kind to the girls, but they are still his prisoners. The key is to find the Constellation Egg, but to claim it and which group? The Reds, the Whites and a surprising third party, The Mystics, all want to lay claim to the egg. St. Petersburg to Moscow to Siberia, they travel across Russia in search of the magical egg, a magic that lives on even though the Romanovs were murdered.

This book is an interesting companion novel for students studying Imperial Russia. Many of the facts are true, the author outlines in the endnote where she deviated from the truth. I have always been fascinated with Russia, and Anastasia was one of my favorite animated movies. The fantasy element was just enough; I imagine it was a very magical time for the nobility, not so much for the peasants, hence, the Russian Revolution.