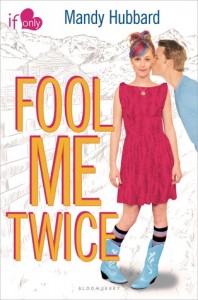 Last summer, Mackenzie fell hard for Landon while working with him at Serenity Ranch and Spa, but she was left heartbroken when Landon dumped her after summer was over.  Now, they have both returned to the ranch to work another summer.  Mackenzie is dreading working with the boy who broke her heart until Landon falls off a horse and gets amnesia.  Suddenly, Landon thinks that it is last summer and that he is Mackenzie’s boyfriend.  Encouraged by her best friend, Bailey, Mackenzie decides to get revenge on Landon by playing along, making him fall in love with her, and then dumping him.  However, Mackenzie’s plans get messed up when she starts falling for Landon all over again.

This is a quick and easy read for anyone looking for a light-hearted love story.  The characters are likeable enough, although the plot is somewhat predictable.  The romance in the book is fairly innocent; therefore, the book could be considered appropriate even for upper middle school students.  I would recommend this book to girls more so than boys.