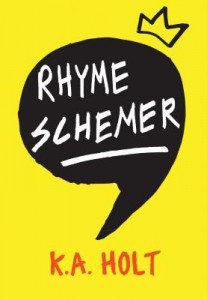 Kevin is the youngest of five children (behind Petey, Philip, Paul, and Patrick) and his parents are successful doctors.  Kevin lives a life of benign neglect, for the most part ignored by his busy parents and older siblings.   His next youngest brother, Petey, constantly bullies him.  Kevin, in turn, considers himself to be “The King of the Seventh Grade”.  He attacks anyone he believes to be weaker or inferior to him.  His new victim of choice is the “class runt” Robin.  Kevin does everything he can to make Robin’s life miserable.

Kevin has a hidden side and a dangerous secret, though; he writes his deepest thoughts (in verse) in a notebook.  He has also begun to tear pages out of library books to make found poems that poke fun at the school’s teachers and administrators. Kevin posts these poems around school and begins referring to himself as the Poetry Bandit.  One day, during an argument, Petey throws Kevin’s notebook out the window of his car on the way to school.  In a twist of fate, Robin is the one to find the notebook.  He becomes Kevin’s bully, threatening to show everyone how “wimpy” Kevin really is, and Kevin eventually beats him up. Kevin is suspended and must shelve books in the school library for two weeks after school as part of his punishment.  He finds an ally in the school librarian, who discovers that Kevin has been tearing pages out of library books to make his “poems”.  She recognizes his talent and works to find him an acceptable outlet for expressing himself.

The book ends with Kevin and Robin being forced to resolve their differences, with Petey beginning to appreciate Kevin as a person, and with Kevin starting to find a sense of worth through his writing. The verse in this book is powerful; it conveys Kevin’s complexity and his need for acceptance.  The found poems throughout the book are clever and capture the range of teenage emotion.  There are some issues with the book that stop it from being truly innovative; it is almost a foregone conclusion that Kevin will be a bully because his parents ignore him and Petey torments him.  The book, like a television sitcom, ties the action up into a neat package in its allotted number of pages.  Any teenager can tell you life isn’t that simple!  However, those who need a big- hearted book with an anti-bullying message (and the message that teachers can be powerful advocates) may find what they need in Rhyme Schemer.

Kevin plans on being “King of the seventh grade”.  Always at the bottom, he is the “accident” his parents made after his four much older brothers.  Often a target of his brothers’ frustrations, Kevin begins to target kids at school, detailing much of what he plans to do in his notebook.  It is filled with poems and free form poetry about his classmates.  Realizing he has a gift with this poetry, Kevin begins to anonymously rip pages from library books, circling words and letters to make cryptic poems, and then posts them around school.  His brother, Pete, takes him to school daily but hardly ever speaks to him.  After an argument, Pete grabs Kevin’s notebook and throws it out the window.  Kevin never recovers the notebook, but one of the kids he relentlessly bullied, Robin, does.  Because of his bullying behaviors, Kevin is suspended.  After he returns to school, Kevin has to volunteer his time in detention to helping the librarian, Mrs. Little.  The book takes the characters and fits them into the cyclical pattern of bullying.  Holt also uses examples of how a bully can evolve from a bully to a victim and how teachers can ignore the behaviors when inconvenient. The plot takes Kevin out of his comfort zone, creating unlikely relationships and building bridges with those who had once been the butt of his jokes. Parental issues compiled with social and sibling issues make Kevin’s life miserable, creating his outlet of expression.  Readers will begin to actually like Kevin and cheer him on.