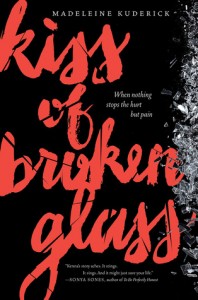 Kuderick, Madeleine. Kiss of Broken Glass. New York: HarperTeen, 2014. 978-0-062306-562 208 p. $17.99. Gr. 7-12.
“So here’s the thing about being Baker Acted…”  This well-crafted novel-in-verse opens with Kenna’s anger about being “Baker Acted” or involuntarily committed for a 72-hour stay in a psychological ward for being caught cutting with the blade from a pencil sharpener in the school bathroom.  She observes and interacts with the others in her midst who impact her deeply.  Her mostly solitary stay leaves time for self-reflection and revelation of the reasons for her cutting: primarily competition and peer pressure from the “Sisters of Broken Glass,” comparisons with an older perfect half-sister, the too-brief high she earns from cutting, and (the worst secret) no reason at all.  Kenna looks to best friend Rennie, leader of the “Sisters,” for support but gets painful rejection instead.  It’s a wake-up call, as is the awareness that she’s lying to younger brother Sean out of shame.  His name pops into her head as “A wish to be a better big sister./A wish to be a halfway decent role model.”  By book’s end, “So here’s the thing about being Released…” Kenna finds that her reasons to cut remain, but her reasons to not cut are more apparent, especially Sean and memories of those during her stay.  Still, she ends with “To tell you the truth, I could go either way.”  Some profanity and descriptions of cutting make this a better read for older teenagers, but anyone who has danced with this addiction will appreciate Kenna’s struggle and insights.  The author’s note explains her research after her own daughter’s episodes with cutting, with a strong list of resources to help.
Realistic Fiction       Melissa Scott, Shenango High School