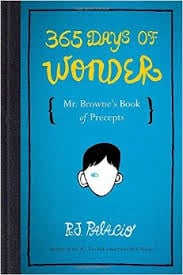 Mr. Browne and his precepts are back.  In a spin off of the book, Wonder, R.J. Palacio creates a companion novel to include 365 precepts compiled to live our lives with more kindness, compassion, and empathy.  In this novel, readers learn about Mr. Browne and the history and reason for his precepts.  Each month of the year has a precept per day.  In between the months, Mr. Browne includes insights including why precepts are used, students’ precepts and the questions stemming from them, and even anecdotes about his own family and how the precepts have affected or impacted them.  Characters emerge from the first book including Auggie Pullman, Julian Albans, Summer and Charlotte.

Use alone or as a companion to Wonder, this book would be perfect to include in a class meeting setting, creative writing, or even a student group based on bullying. Educators can utilize the precepts as a thought a day asking students to expound on what the precept means to them.  In essay form or as an open ended response, students could relate the quote or excerpt to their own lives, employing a text to self connection. Not necessarily solely for education, this book could also serve parents who hope to invoke a sense of empathy in their own children, discussing the precepts and their meaning. 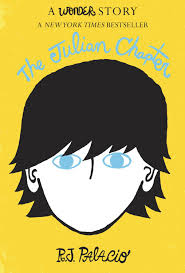 Everyone fell in love with Auggie Pullman and grew to dislike Julian Albans in the first book, Wonder by R.J. Palacio.  In The Julian Chapter, we hear Julian’s side of the story.  Complete with behind the scenes details from the first day Julian is brought in to be Auggie’s tour guide, through the decision for Julian to not return to Beecher Prep, this perspective is one we rarely see.  Raw and intrusive, the reader can see into the parenting and psychological background from Julian’s point of view.  Because readers could only guess what Julian was thinking in the first book, they can now discover what he was thinking to himself in each situation.

Julian’s actions and thoughts were molded by his parents’ upbringing.  Readers will get a rare glimpse into the raw interactions between parent and child.  Julian’s perspective, although outwardly a bully in Wonder becomes one readers can connect with and even sympathize with in this novel. Only three CDs, the book is a quick read (and the audio a quick listen).  Available only in Kindle audiobook and CD, this audiobook is a nice way to follow up the book Wonder and a way to discuss character education particularly the role of a bully.