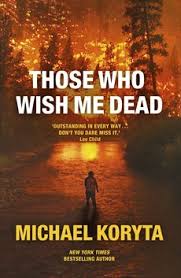 While cliff jumping at the quarry one day, 13-year old Jace witnesses a brutal murder. Now he is the next target of the killers, the merciless Blackwell Brothers. To buy the police some time to find the Blackwells before they find Jace, the boy is given a new identity and hidden in a Montana wilderness skills program for troubled teenagers. Even Ethan Serbin, the survival specialist in charge of the wilderness program, doesn’t know which of the seven boys in his group is the one in hiding. But when the Blackwell Brothers attack Ethan’s wife and set fire to his house, Jace knows in his gut that those who wish him dead are coming for him next. From the very first sentence, this novel will have you on the edge of your seat. With a riveting plot, believable characters, and a setting so real that you can almost feel the heat from the campfire and hear the snap of twigs as the bad guys sneak up behind you, this is a pageturner in every sense of the word!

This is an excellent crossover novel; it’s written for adults, but teenaged Jace and the wilderness survival angle lend it tremendous appeal for young adult readers. It would be interesting to pair it with Becca Fitzpatrick’s recent winter-survival thriller Black Ice (Simon & Schuster, 2014) or have a book discussion including a viewing of Discovery’s popular survival series, Dude, You’re Screwed.