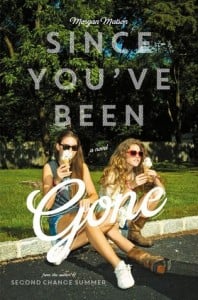 Emily and Sloane have been inseparable since Sloane moved to Stanwich two years earlier.  But now, Sloane has disappeared leaving Emily with no clue as to where she went, why, or for how long.  After two weeks with no sign of Sloane or her parents, Emily realizes they didn’t just go on a vacation.  So, what happened?  Sloane had never disappeared before, at least not without a call or text.  What is Emily to do without her best friend?  That’s when “The List” appears.  “The List” is the final communication from Sloane to Emily and contains thirteen things for Emily to do before the end of summer.  All of the items, from “1. Kiss a stranger” to “6. Ride a dern horse, ya cowpoke” to “13. Sleep under the stars”, are all things that outgoing Sloane would do, but quiet, reserved Emily wouldn’t consider, until now.  With “The List” as the only connection Emily has to Sloane, she sets out to complete it and ends up finding herself, an Emily without Sloane, in the process.

Matson does it again in Since You’ve Been Gone.  As with Amy and Roger’s Epic Detour and Second Chance Summer, she carefully crafts a bildungsroman different from most in YA because she does it without being graphic in nature.  Instead, she creates characters the reader cares about (and often wishes were their friends) and grows with throughout the novel.  In Since You’ve Been Gone, the novel seems to be plot driven, Emily trying to complete “The List”, but instead, one realizes at the end, is actually a character study and story of identity.  This is a great novel for students who may have lost someone close to them because, although Sloane isn’t permanently gone, the feeling of loss and grief from that loss is what drive Emily to complete, what some may consider, Sloane’s dying wish, “The List”.  As Emily found an identity through Sloane and with Sloane, she now, because of Sloane, has found her true self; an independent, confident Emily.