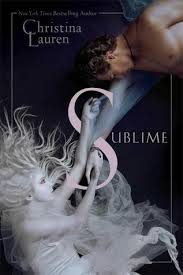 The first thing one notices about this book is its beautiful cover depicting a pale, ethereal, girl gazing up lovingly at a handsome but unconscious young man.  I was drawn to the book by its cover, and many students will borrow this book for the same reason.

The story opens with the beautiful and ghostly Lucy simply walking out of the woods at St. Osanna’s boarding school.  She doesn’t know why she’s there, but when she sees one of the students, Colin, she is immediately drawn to him.  Colin’s feelings for Lucy are similarly intense.  As time goes on, Lucy is revealed to be a ghost who haunts the school after she is murdered.  Colin is also revealed to be the young boy who saw Lucy being abducted and led authorities to her killer.  The yearning (obsession) between Colin and Lucy is difficult to comprehend.  Colin has been an adrenaline junkie for years. He and fellow daredevil, Jay, inadvertently discover that near–death experiences allow Colin to enter Lucy’s world in a physical sense.  Colin begins to take part in ever more dangerous stunts on the school’s icy cold lake, so he can simulate death and be with Lucy.  He begins to suffer physical effects from the frequent near-death experiences at the same time Lucy gains new vitality. It is almost as if she is sapping the life from him.

One of Colin’s later stunts gone wrong almost does kill him. St. Osanna’s nurse, whose experience with the “walkers” has taught her that there is an element of evil to these ghosts, orders Lucy to stay away from Colin. Lucy’s anger/ psychic force is so great that she causes a tray of surgical tools to injure the nurse.  For the first time, Lucy sees herself for what she really is and retreats into the lake to spend eternity.  Colin’s actions following Lucy’s disappearance are drastic.  Many readers and literary critics have taken issue with the ending, but the author hints throughout the novel that there can be no happy endings in ghost-human relationships.  This was a very different kind of ghost story and if the reader tries to keep in mind that it is not another Twilight, he/she may actually enjoy it.