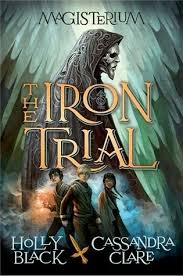 Most people do not know that magic exists, but Callum Hunt does, and he knows that it is evil.  He swears to his father that he will intentionally fail the Iron Trial, also known as the entrance exam to The Magisterium, or school for mages.  Despite his best attempts to fail, Callum is dragged to The Magisterium and forced into an apprenticeship, along with two other students, with an accomplished mage.  Though his mind is set to escape as soon as possible, Callum cannot help but be entranced by the world his father hid.  He learns of the great evil that the mage’s are trying to defeat and secrets of his family’s involvement with the war.  A crippling discovery encourages Callum to devote his allegiance to his two fellow apprentices and the unavoidable battle that will ensue.

This is the first book in what will be a five part series, and I enjoyed it a lot more than I had anticipated.  Clare and Black are an excellent writing team.  There are many, many similarities with The Iron Trial and the Harry Potter series, but it is unique in its own right.  The main character is not the hero but an unlikely sidekick.  The book is full of twists, and the cliffhanger ending will leave readers eager for the next one in the series.