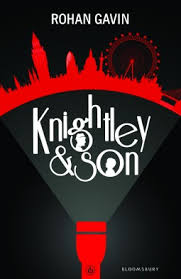 Thirteen-year-old Darkus Knightley admires his private investigator father and longs for his praise and guidance.  Alas, Alan Knightley’s logical mind leads him to emotionless, logic-centered living—and that was before his four-year coma.  During his coma, Darkus memorizes his father’s case files out of interest and as conversation during his weekly (one-sided) visits.  This knowledge makes him supremely useful when his father awakens from the coma because crime has increased, and his files are stolen.  Alan is convinced a sinister group called “the Combination” is behind it all.  Oddly, a book called “The Code” seems to lure ordinary people to commit crimes.  Alan reluctantly includes Darkus and Darkus’ half-sister, Tilly, who proves her mettle with gadgetry and sarcasm.  Along the way, Darkus learns how his father works, and how much he is—and is not—like him.  Humor and danger abound, and Darkus and Alan each grow to respect and love one another a bit more.  For fans of mystery Sherlock-style, with a well-rendered father-son relationship.  This could be used in conjunction with crime/forensic units, or with Sherlock Holmes’ stories, to compare the difference made by character age, gender and personality of sidekick, or time period.  Knightley and Son K-9 to be published February 17, 2015.