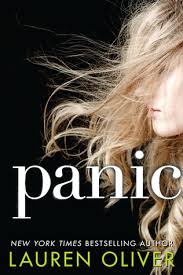 Carp, New York, is a dead end town full of desperation, broken dreams, and dead ends.  Everyone dreams of getting out, but that is easier said than done when money is scarce and opportunities are rare.  The teens in Carp have designed their own way to beat their boredom and give one person the chance to escape.  Each student pays a $1.00 fee every day of the school year and the graduating seniors have the chance to compete for the prize by entering the game of Panic.  No one knows who the game makers are; no one talks about the illegal game to adults, and rule breakers are penalized to the fullest degree.  The game involves deadly challenges, ending with the final competitors competing in a car joust.  The current pot is worth $67,000.00, and Heather and Dodge both desperately need the money.  Dodge is out for vengeance.  He is playing for his sister, who was severely handicapped during the game two years age.  Heather enters the game after her boyfriend breaks up with her, but the money becomes a lot more important when she runs away from home with her 10 year old sister.  As secrets and tension rise, each character has to decide just how far they are willing to go and what they are willing to give up in order to be declared the winner.

This was one of those books where I couldn’t make any emotional connections to the characters.  Heather came across as slightly immature, even though she takes on responsibilities that no kid should.  She takes advantage of Bishop, who is one of the few people that genuinely cares about her.   The description of the book portrays the storyline to be comparable to the cut throat type of competition found in The Hunger Games, but I did not find that to be the case. 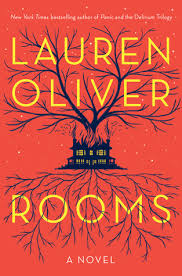 Lauren Oliver, who began her career as a young adult author, has written an engaging gothic novel aimed at expanding her fan base to adults. With Rooms, she has hopefully reached a whole new audience for her works while still pleasing her more mature young adult fans. The story takes place in an old country house owned by the recently deceased Richard Walker. His family, including his alcoholic ex-wife, grown-up daughter Minna and her young daughter Amy, and teenage son Trenton, return for his funeral and to claim their inheritance.  The story is told from the perspective of all of the main characters- including the two ghosts that inhabit the old house. Alice, the older of the two, begins the narration, and it is her voice that is strongest throughout the novel. She and Sandra, the other ghost, were former owners, and the reader slowly learns their stories and why they haunt the house through frequent flashbacks, a technique used throughout the book with all of the characters. Both ghosts, and the living, must come to terms with their troubled pasts in order to move on. Trenton, a sullen teenage outcast, feels the ghosts in the house. Many teens will relate to Trenton, whose story takes center stage when he begins communicating with a third ghost and mysterious young girl. There are a few sexual references and scenes, yet I would highly recommend this title to more mature young adult fans of Lauren Oliver, and to anyone who enjoys a satisfyingly chilling ghost story.

This is the first book that I  read by Lauren Oliver, and I was supremely impressed with both her writing style and her storytelling ability. She paints lovely pictures with her words, and her writing is definitely a step above most other young adult authors. Thus, it is only natural that she has evolved into the realm of adult fiction. Immediately after reading this book, I picked up Before I Fall and was again treated to her beautifully lyrical writing style. Rooms showcases her writing and is even more descriptive than Before I Fall. I loved how each character was given his or her own voice throughout the book. It made me sympathize with each one, even though many of them, at first, seemed extremely unsympathetic. Since many teens struggle with empathy, these back stories are important and highlight the need of all individuals to see beyond the simple veneers that we show to the world. One must dig deeper to discover why the characters act the way they do, which is something that we all should do with each person that we meet and with whom we engage. I recommended this title to a teacher, and he also enjoyed the book and is now interested in other titles by Oliver. I cannot wait to recommend this to my book club for next October, as it is the perfect selection for a lead-up to Halloween!