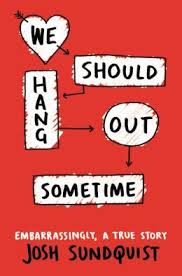 “When I was twenty-five years old, it came to my attention that I had never had a girlfriend.” So begins Josh Sundquist’s quasi-scientific quest to revisit each of his almost-relationships, formulate a hypothesis about what went wrong, and reach some conclusions about his girlfriend-less state. His investigative process involves tracking each girl down and meeting up for a platonic lunch date, where he attempts to pin down the reasons why they never attained boyfriend-girlfriend status. Along the way he addresses his own insecurities about growing up as an amputee (he lost one of his legs to Ewing’s sarcoma at age 9) despite his subsequent success as a Paralympic skier. His candid, self-deprecating recollections of the many times his artificial leg landed him in awkward situations on dates are among the book’s funniest. Sprinkled throughout are charts and graphs that Josh uses to illustrate his problems with acquiring a girlfriend. This is a hilariously cringe-inducing memoir about one young man’s path to realizing that he is worthy of love, just the way he is. Many readers will especially appreciate the way that Josh sticks to his values throughout all of his adventures and misadventures. I would recommend this memoir to fans of Aaron Hartzler’sRapture Practice (Little, Brown 2013), as well as reader’s of Don Calame’s slightly rowdier Swim the Fly series.

Josh Sundquist is a popular YouTube presence (his channel: https://www.youtube.com/channel/UC_emNizR6F0IYAu68pl3Y1Q) and his videos endearingly chronicle his quest to fill the “girlfriend-shaped hole in [his] heart.” Playing a clip or two would be a great addition to a booktalk for this title. And some of the passages are too funny not to read aloud. My personal favorite is this one in which Josh describes his father’s probable future physique: “Just a gray-haired head and bean-pole arms popping out of a pair of wool trousers hiked up to his armpits like a strapless dress.”