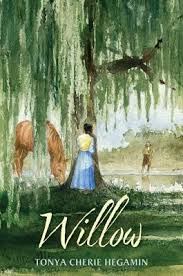 Willow is a fifteen-year-old slave growing up just south of the Mason-Dixon Line in 1848.  Her life is far different than most other slaves.  Her master, Reverend Jeffries, has taught her to read and write.  She believes that they are almost like family and has little desire for a free life.  Willow’s family has been a part of Knotwood Estate for five generations, and although her mother is dead, she is being raised by a loving father and the other slaves of the estate.  Willow knows that change is coming, however.  Willow’s father has been pressuring her to marry and have children, so the next generation will be ensured a place in the Jeffries family Bible.  There are few suitable men for Willow to marry and her father/Reverend Jeffries have chosen Raymond, a slave at a neighboring plantation.  Willow is distraught over this choice, and bemoaning her lack of choice in the decision, rides off on horseback to her mother’s grave.  While she is praying to her mother, she catches her first glimpse of Cato, a free black man who has been helping slaves cross the Mason-Dixon Line to freedom.

Reverend Jeffries is also contemplating marriage to a widow, Mistress Evelyn, and her grown son from Baltimore.  When the widow visits Knotwood, it is clear that many things will change once she is the Reverend’s wife.  Willow has grown closer to Cato, who wants her to come North with him.  However, Willow commits to life on the plantation as a married woman because it is her duty, but she is deeply saddened because she realizes that there is no place for her anymore as an educated slave at Knotwood.  A dramatic series of events finally leads Willow to decide she must leave with Cato, and they try to make their escape in the tense pre- Civil War days of the Fugitive Slave Act.

This novel did not receive a lot of critical attention, but it is both exciting and well-researched.  It would be a useful adjunct to any classroom study of the Civil War Era and the significance of the Mason-Dixon Line. Although Willow becomes romantically involved with Cato, this is not a love story.  Instead, it is the story of a young woman who must escape from a different kind of slavery- the traditions and family ties that can also be imprisoning. Willow’s story is quite relevant to young adults today who must choose between family, duty, and following their own dreams.