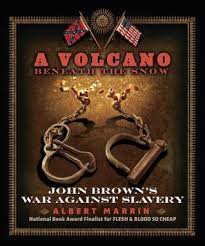 John Brown, born in 1800, was a religiously devout white abolitionist.  Brown’s approach to ending slavery was different than many of his contemporaries. Most abolitionists of the time favored a peaceful approach and working through government to end slavery.  John Brown felt that slavery was an affront to the Lord and believed that slavery should be eliminated by any means possible, including violence.  Albert Marrin, author of A Volcano Beneath the Snow, argues that Brown had a major role in inciting the Civil War and was “the Father of American Terrorism.”

John Brown’s anti-slavery actions show that the title may have been earned.  In 1855-1856, the actions of pro-slavery “border ruffians” in the Kansas Territory angered Brown so much that he and his followers killed five pro-slavery settlers who were not actively involved in the Territory conflict.  Brown was even more infamous for his 1859 raid on Harpers Ferry (now West) Virginia when he and a group of followers raided the US Armory to obtain weapons for a mass slave rebellion.  Many of Brown’s followers deserted him, but Brown would not surrender and was hung for treason.

This book, aside from being a thorough documentation of historic events, gives the reader a real picture of John Brown’s personality and motives.  It is well-written and should be easy for most students to understand.  Albert Marrin puts John Brown’s life into context by including chapters on the history of slavery and Civil War events.  This book also features an abundance of primary source documentation (photographs, maps, drawings and diagrams) and an extended bibliography.  However, the one thing that sets A Volcano Beneath the Snow above other histories of the Civil War is its discussion of John Brown’s legacy.  The idea that violence is an acceptable way to achieve a Holy purpose (or justifiable revenge) is an integral part of modern terrorist thought.  Although Americans were horrified by the events of September 11, 2001, including the deaths of thousands of innocent people, the members of al-Qaeda viewed it as an act of Holy war against a Godless society, similar to Brown’s views.

This story is a thoroughly-researched and engaging study of a man who is significant to American history than it would first appear.  A Volcano Beneath the Snow is certainly a valuable addition to any secondary school collection.

One thought on “A Volcano Beneath the Snow: John Brown’s War Against Slavery”