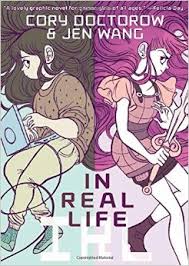 Shy, teen Anda and her family have recently relocated to Flagstaff, Arizona. One day in programming class, a guest speaker invites students to participate in Coarsegold, a massive-multiplayer online role playing game. In Coarsegold, Anda makes friends and soon joins a league of guild members who work for real-life cash by destroying gold farmers that are seemingly corrupting the game. Anda isn’t quite sure this is fair gaming and becomes concerned when she talks to one of the farmers and learns that gold farming is actually his job. It’s through this friendship with the farmer, Raymond, that Anda discovers that behind these avatars are real people and actions in the gaming world sometimes have real-life consequences. Doctorow presents readers with the economics of so many popular online role playing games, while gently reminding us of the humanity that’s hidden in the virtual world. Wang’s illustrations are beautiful frames of jewel toned watercolors that help to bring the comic to life. Recommend this to gamers, Cory Doctorow fans, or anyone who loves graphic novels.

I am a big Cory Doctorow fan, and while this graphic novel was good, it wasn’t my favorite. The artwork was truly beautiful, and very unlike other artwork I see in graphic novels, which was refreshing. The story was fine, and I liked the idea of exploring the virtual economy of massive multiplayer online RPGs. The climax didn’t have a big impact on me, so I admit I was a little disappointed. However, my students have been enjoying it, and I’m always happy to promote a graphic novel that features a female gamer, so I don’t think I’ll share my disappointment with the student body!