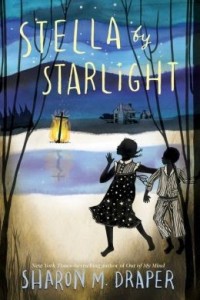 Draper, Sharon. Stella by Starlight. Atheneum Books for Young Readers. 2015. 9781442494978. 336 pgs. $16.99. Ages 9-12.
Stella and her brother are out late one evening and come upon a horrific scene. They don’t know what to make of the people in white hoods and the cross burning in the field. They rush home, completely scared, and report what they have seen to their parents. Thus begins many events involving the Klu Klux Klan and how a community comes together, both black and white. Sharon Draper also provides a story of how family is more important than anything. Stella learns some very difficult lessons, including how to be a good friend and student. Once again, Sharon Draper does not let her readers down. This book is not an easy read and would be best for more mature readers. The content is extremely sensitive, but would make for a spectacular literature circle.
Historical Fiction        Krista Goodzinski/Mars Centennial 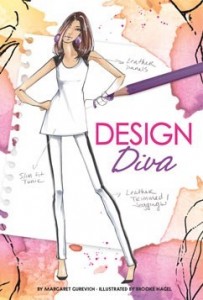 Gurevich, Margaret. Illustrated by Brooke Hagel. Design Diva. New North Mankato, Minnesota: Stone Arch, 2014. 978-1-4342-9177-6. 91 p. $18.04. Gr. 5-8
Travel to Santa Cruz and meet Chloe Montgomery, a budding 16 year old fashion designer,. Along with her best friend, Alex, they watch the fashion reality television show “Design Diva.” Alex encourages Chloe to enter the teen contest for the show. Chloe is nervous at first and her fashion rival, Nina, is also going to try out. Throughout the novel you can see the clothing choices and color fashion designs artfully designed. At the conclusion of the novel Chloe’s designs advance her in the competition. The next book in the Chloe by Design series is The First Cut.  This series is favorite for student with an interest in design and fashion at my middle school.
Fiction, Friendship, Fashion   Beth McGuire, Wendover Middle School 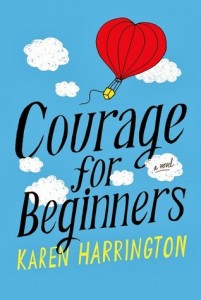 Harrington, Karen. Courage for Beginners. New York: Little Brown, 2014. 978-0-316-21048-5. 289 p. $17.00 Gr. 5-8
7th grade brings numerous challenges to Mysti as she comes to grips with her best friend Anibal’s goal to become a hipster, the fact that her father is critically injured from the tree fall and the secret that her mother will not  leave the house to confront her agoraphobia. The novel is told in a compassionate tone for the struggles facing the family. Mysti embraces Anibal’s social project even though this requires his cruelty towards her at school. This also means that Mysti will need to find somewhere to sit at lunch and hopefully a new friend or two, which luckily she eventually does. As it takes longer for her father to heal at the hospital, Mysti has to endure long walks that led to nefarious situations while obtaining the family groceries. Each chapter begins with a story Mysti envisions while chapter are appropriate for a read aloud. The novel earned starred reviews from Book List and VOYA.
Fiction, Family, Friendship              Beth McGuire, Wendover Middle School 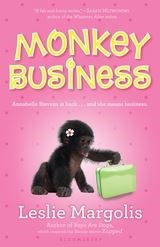 Margolis, Leslie. Monkey Business (Book 4 in the Annabel Unleashed series). New York: Bloomsbury, 2014.  978-1-61963-393-3.  211 pages. $16.98. Grades 3-5.
Annabel can’t wait to show her best friends her new house.  Her family has just moved and her mom and stepdad are expecting a new baby. But Rachel, her best friend is saying mean things and Annabel can’t figure out why.  When the girls find out about a benefit concert starring all of their favorite bands, they decide to ask for permission to go.  When the parents decide that the girls must earn the money to go, they have to get creative!  The girls have some difficulty getting along, so issues of friendship and working out difficulties arise.  Annabel is also getting used to the idea of being a big sister and the changes to their family life. A fun and realistic look at the lives of twelve year olds today. Great themes of working for something and not judging someone for what they do or don’t have are great lessons for today’s kids.
Realistic Fiction      Donna Fernandez, Calvary Christian Academy 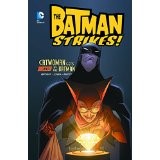 Matheny, Bill. Catwoman Gets Busted by the Batman. (The Batman Strikes, part of the Graphic Resolve: Common Core editions series). N. Mankato, MN: Stone Arch, 2014. 978-1434292117.  $21.27. 32p.  Gr.  3-6.
The prized Blue Novick Diamond’s just been stolen, and Catwoman was seen at the scene of the crime. But the Batman knows she’s innocent. Will they team up to catch the real crooks? Read this fun, action-packed, and beautifully illustrated graphic novel to find out!  Re-tooling the classic comic book to appeal to teachers of the Common Core, this series includes features in the back: glossary and visual questions and prompts on both the story and the graphic novel style. One of 9 books in this The Batman Strikes series, I’d highly recommend these for superhero fans, especially younger and reluctant readers.
741.5 Graphic Novel   Kathie Jackson, Plymouth Meeting Friends School 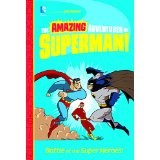 Stewart, Yale. Battle of the Super Heroes!   (The Amazing Adventures of Superman series). 978-1479557318. N. Mankato, MN: Capstone, 2014.  $23.99. $21.27. 32p.  Gr.  K-2
This exciting episode begins with Superman investigating an explosion only to discover it’s, wait…Batman? Destroying the City? When Batman then punches his ally Superman in the nose, we know something fishy is going on! The book ends with a secret message for readers to decode and a glossary to help them decode new words they’ve encountered. Very fun. While these 5 books in The Amazing Adventures of Superman series are not graphic novels, I shelve them with my superhero graphic novels to entice my beginner and lower level readers looking for a superhero action fix.
Easy Reader   Kathie Jackson, Plymouth Meeting Friends School

Sherry, Kevin. The Yeti Files: Meet the Bigfeet. New York, NY: Scholastic Press, 2014. 978-0-545-55617-0. 122 pages. $8.99. Grades 1-3.
The introduction to this promising series of monster mythology mashed with humorous comics introduces us to a world hidden to human readers. But a yeti named Blizz Richards lets us visit the cryptids, a group of beings who have never been proven to exist, as they have a reunion at bigfoot’s lair. All should beware of the snooping cryptozoologist who could ruin the mystery and magic of these creatures as the story quickly evolves. This book has two great things going for it. For one, it is an easy sell for fans who move easily between picture books, graphic novels, and beginning chapter books looking for entertainment. Second, the diagrams, charts and tons of humorous labels to the illustrations provide a cool crossover from non-fiction text features. Sherry’s clever crossover story with  imaginative characters won’t remain undiscovered on your library shelf for very long!
Fiction; Fantasy    Dustin Brackbill State College Area School District 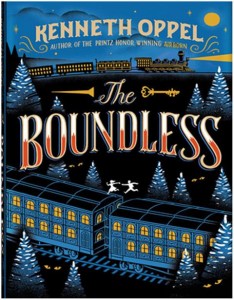 Oppel, Kenneth. The Boundless. Simon & Schuster Books for Young Readers: New York. 2014. 9781442472884. 336 pages. $17.99. Ages 8-12.
All aboard! William Everett is on the ride of his life. Coming from a poor family in Canada that relies on the father to make a living as a brakeman on the Canadian Pacific Railway, William finds himself on adventure that could get him killed. William’s father goes from laborer to General Manager in 3 short years after saving the life of the founder of ‘The Boundless’, the longest train in the world. The families’ new lifestyle includes new houses and the best education. Not only does William now live a life of luxury, but he has to decide whether or not he follows his dream of studying to be an artist or pleasing his father and going to college to get a ‘real’ job. During his journey, William meets a young girl that is a member of a circus that is part of the 5 mile Boundless Train. She not only helps William escape the man that is trying to kill him, but she encourages William to do what he loves. Hop on board to discover the magic and mystery of The Boundless.
Fiction/Mystery/Adventure                     Krista Goodzinski/Mars Centennial 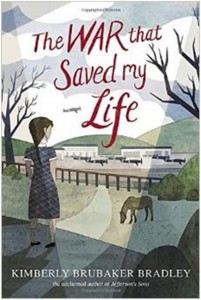 Bradley, Kimberly Brubaker. The War that Saved My Life. Penguin Young Readers Group. 2014. 9780803740815. 320 pages. $16.99. Ages 9-12.
Ada and Jamie live in London, England during World War II. The parents of the community they live in are preparing to send their children away in order to protect them from the ‘war’ that is knocking on their door. Unfortunately for Ada, her mother treats her terribly due to her foot and tells her that she will not be sent away. Without her mother knowing, Ada taught herself how to walk and ‘escaped’ to the country with her younger brother. They are taken in by a woman that initially knew nothing about taking care of children, but quickly takes the children under her wing and provides them a home life they never knew existed. This story allows the reader to experience the successes of Ada as she learns to walk, ride a horse, read, and be loved for who she is
Historical Fiction                                                                                             Krista Goodzinski/Mars Centennial