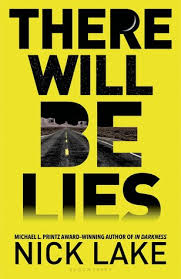 The book opens with the news that the narrator will be hit by a car in four hours, and her world is going to end. Thus begins the complicated story of Shelby Jane Cooper as she discovers who she and her mother really are. Shelby is one overly protected teenager, and her mother is definitely an oddball, but their bond is strong and will be put to the test as Shelby’s world crumbles. There are some interesting and exciting plot twists along the way that also keep the reader guessing.

This novel is by written Nick Lake, Michael L. Printz Award winning author of In Darkness. His newest novel has just the right mix of Native American mythology and Grimm’s fairytales to really make the story appealing as Shelby goes back and forth between reality and “the Dreaming” to save a crying child and ultimately herself. This novel is touted as an “emotionally charged thriller” with the reader wanting to know what is going to happen next to find out the truth about Shelby.