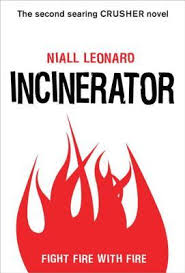 Incinerator is the follow-up novel to Crusher second book in the series, but lacks in plot and focus. Based in a suburb of London, Finn, an emancipated orphan has just bought a boxing gym with his former coach in the wake of his father and mother’s bloody deaths. His girlfriend floats in and out of his life.  Finn dove deeper and deeper into the underworld in the first novel but is now focused on finding his missing lawyer who incidentally has his extremely large inheritance with her. Faced with the dilemma of losing his newly acquired business, Finn once again jumps into the illegal crime world of the Governor, a crime boss who took him under his wing in Crusher. Ultimately, Finn will once again recover from the downward spiral of his chaotic life in an unbelievable ending. Educators may find this adventure-bound novel to be great for reluctant readers who want reckless abandon. Without real depth, the characters are flat, often begging for an explanation or at the least some feeling, focusing mainly on action and not details.  The book itself was confusing, recycling secondary characters from Crusher to become main characters in Incinerator. It stated the book was the second in a series, but could have been read without reading Crusher.