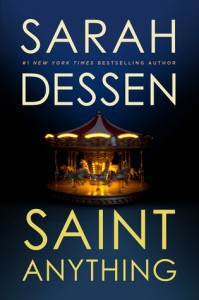 Sarah Dessen has become well-known for crafting engaging, complex stories of young teens dealing with difficult issues and experiences. Her latest novel, Saint Anything, carries on this tradition and immerses the reader once again in an emotionally charged story. All of her life, Sydney Stanford’s handsome and charismatic brother, Peyton, has stolen the spotlight. Yet his increasingly poor decisions lead to a drunk-driving incident that leaves a young boy paralyzed and Peyton in prison. Sydney’s mother seems to side with Peyton and puts his needs first, forgetting about the victim. She also leans on and trusts Ames, Peyton’s friend, even though he always gives Sydney a “creepy” vibe. Sydney alone seems to carry with her the burden of Peyton’s actions every day. To escape her brother’s shadow, she decides to leave Perkins Day, a private school, and attend Jackson High, the local public school. One day she walks into Seaside, a local pizza place, and meets the Chatham family, the owners of the establishment. She quickly becomes friends with the beautiful and vivacious Layla and her handsome yet quiet brother Mac. Soon, Sydney becomes a part of their family, attending concerts for Mac’s band and exploring the woods behind their house. However, things become increasingly tense at home between Sydney and her parents as their relationship with Peyton becomes strained. The resolution is a bit predictable, but the characters are interesting and engaging as usual and readers will fall easily into the story. Most will empathize with Sydney and wonder why her mother insists on siding with Peyton (the one character I would have liked to have heard more from). Overall, this is a strong addition to Dessen’s line up, and will be well-received by her fans.

It is no secret that I love Sarah Dessen, and always enjoy picking up one of her books. I fall so easily into the story, and Dessen’s writing is simple and comforting. This story does deal with a very serious issue, but not from the point of view of the one committing the crime. Instead, viewers are given a glimpse into the lives of those affected by the actions of the perpetrator. While I did enjoy Sydney and her point of view, I would have liked to have heard more of Peyton’s story, and how he was dealing with the guilt. I do, however, I understand that this was Sydney’s story, not Peyton’s. Possibly, Dessen could write a short novella about his experiences? This would expand a reader’s empathy and maybe even further develop the character of Peyton’s mother as well. Or, maybe I need to begin writing some Sarah Dessen fan fiction…

Living in her older brother Peyton’s shadow, Sydney is longing to feel the sunshine of her parents’ affections. Peyton is incarcerated after a string of bad decisions, resulting in a stay in rehab and being jailed for drinking and driving which resulted in paralyzing a boy who was riding home on his bike. Sydney has never been the child her parents have had to worry about, but after mounting bills for her brothers’ defense start to become overwhelming, she decides to help her parents by enrolling in a public school and exiting her elite private school.  It is by accident that she wanders into a local pizza  place where she meets the Chathams, a brother and sister duo who will change her world.  For Sydney, this unconditional acceptance and love is eye-opening.  It gives her the confidence and support she is lacking in her own family. Told with the sweet teenage voice of Sydney, the novel captures the way in which teenagers are constantly looking to fit in somewhere and when they do, the way in which they flourish emotionally is truly incredible.

Dessen, known for playing on the heartstrings, hits it out of the park with this novel.  She creates characters who share commonalities with readers, allowing them to relate to the situations and problems. The main conflict of the novel is the way Sydney’s parents are so wrapped up in the issues surrounding her brother, rather than her own emotional well-being. Dessen gives credibility to teens who are searching for change and the confidence to achieve it.