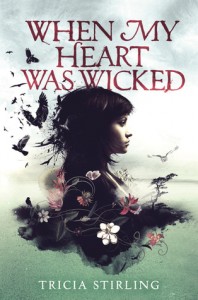 This debut novel packs a lot into a quick 173 pages, but Tricia Stirling succeeds in creating a darkly enchanting tale of one young girl’s quest to define herself. When we first meet Lacey, her beloved father has recently passed away and she is living with Anna, her stepmother. Suddenly, her mother, who had been missing for 3 years, returns and forces Lacey to move back to Sacramento with her. Though unwilling, Lacey complies. Her unwillingness stems from her feeling that she becomes a completely different person when she is in the shadow of her mother- dark, angry, and evil. With her father and Anna she is light, happy, and kind. She knows that this Lacey cannot be sustained when she is living with her unpredictable and dangerous mother. Her mother is some sort of witch (her powers are never clearly defined), and her ability to craft spells has been passed on to Lacey. These skills prove to be useful in her new school in which she is bullied by a group of girls. Lacey is also singled out by a boy with a sketchy reputation, and though warned by one of his prior victims, she falls prey to his advances and becomes the target of his vicious rumors when she refuses to have sex with him.  Lacey begins to perform small spells and have occasional outbursts that make her feel like she is once again turning into the evil daughter of her evil mother. The text occasionally falls into a stream of consciousness narrative, and the reader must keep up with Lacey throughout her rambling thoughts. She jumps back and forth between past events and the present, and the reader is left to pick up the pieces and figure out what it is that makes her both love and hate her mother. This ambiguity works well with the novel’s theme of the difficulties that lie in defining oneself outside of one’s family and friends. Lacey does make friends in her new school, and these relationships keep her grounded amid the fraying relationship with her unpredictable mother. The characters are interesting and realistic, though one wonders how Lacey’s mother can be considered a fit guardian for her daughter. This novel will engage readers who enjoy dark tales with a realistic edge to them.

Similar to how the main character struggled to define herself, I struggled to define my feelings about this novel from beginning to end. It is captivating and Lacey has a unique voice, but the interspersing of witchcraft caught me off guard on occasion, possibly because the rest of the novel is typical young adult drama- dealing with a new school and friends, bullying, fighting with parents, etc. The witchcraft did lift it up out of the “general” realistic fiction into something supernatural and dark, which I believe will appeal to teens looking for something more than the standard fare. I am eager to see more from this author.