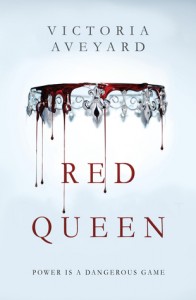 Mare Barrow is a Red, the lowest class of citizen in Norta.  Silvers, who rule Norta, do not bleed red blood like the reds.  Instead, they bleed silver and have powers that allow them to control elements of nature, the mind, and others.  Living in the Stilts, Mare has learned to thieve her way through life to provide for her family.  As she nears her eighteenth birthday and conscription (a life in the army due to lack of skill), she has accepted her future until her best friend, Kilorn, loses his apprenticeship and must enter conscription, a fate that caused him to lose his father and family at a young age.  Mare has always felt the need to protect Kilorn, so she sets out to steal enough to buy their freedom.  An attack by the Scarlet Guard, a Red rebel group, ruins her plan to escape and her own family’s future, so Mare does the only thing she knows and runs.  As she pickpockets outside of a tavern, she’s caught, but instead of being punished her capture gives her a tetrarch, a silver coin worth much more than the pennies Mare has stolen.  Soon after this encounter with Cal, a royal servant arrives at the Barrow home for Mare.  Mare is taken to Summerton, the royal’s summer home, where she is to serve the royal family and high houses.  With conscription no longer looming over her, Mare accepts a life of servitude, but during Queenstrial, Mare falls from a balcony into an electrified dome and is not burned up.  Instead, lightning surges from Mare, and she almost kills Evangeline, the front-runner for future queen.  Mare shouldn’t have powers; she’s a Red, yet she just summoned lightning and electricity.  The royals must cover up Mare’s powers because Reds cannot be equal to Silvers, and they cannot kill her because too many questions would arise.  Queen Elara creates a ruse around Mare, which she must play along with to protect her family.  Within the day, she is betrothed to Prince Maven and learns that Cal, the man who caught her stealing outside of the tavern, is actually the king’s first son.  As Mare is schooled in all things Silver, she learns of the evil living in the royal family and high houses and their need to maintain power.  When approached by the Scarlet Guard to fight against the Silvers, she accepts and learns that her betrothed, Maven, is also a sympathizer and has joined the Scarlet Guard.  As they work together to learn more about the guard and help them rebel against the Silver ruling class, Mare learns that trust should not be given lightly and anyone can turn at any moment.

Red Queen (to me) is a mash-up of The Selection by Kiera Cass, The Grisha Trilogy by Leigh Bardugo, and Trial by Fire by Josephine Angelini. It’s fantastical due to the powers that Silvers possess but also very realistic.  Aveyard does a great job providing characters to love, hate, root for, and root against, while maintaining the reality of the world: a ruling class enslaving those “less than them”.  The need for rebellion is clear in the novel, but Aveyard does not shy away from the intensity needed for change to occur nor the pitfalls and defeats found in revolution.  The Scarlet Guard do not win; evil wins, which then leads the reader to consider our world today and how we govern ourselves, treat one another, and think about why people chose to commit evil acts against others.  Red Queen is an excellent debut novel.  Aveyard has set the bar high for her follow-up novels and the remaining pieces of this anticipated series.