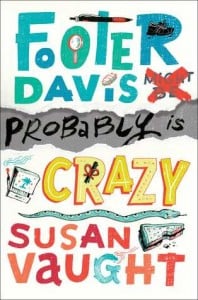 Nine days ago there was a fire at the Abrams farm.  Mr. Abrams was shot and killed, and Cissy and Doc, his grandchildren, are assumed dead.  Eleven year old, Fontana “Footer” Davis, is determined to figure out what happened at the Abrams farm.  With the help of her best friend, Peavine, and his sister, Angel, they set out to interview neighbors and “witnesses” of the fire.  Footer, though, is worried about more than just figuring out what happened to Cissy and Doc; her mother is back in the hospital in Memphis battling her bi-polar disorder.  To top it all off, Stephanie Bridges, from the Mississippi Children and Family Services office, is now interfering in Footer’s life after she gets into a fight at school and is caught reading (and writing) about serial killers.  As Footer tries to manage Steph, misses her mother, and tries to figure out the Abrams’ mystery, she continues to visualize the night of the fire, smelling smoke and seeing images of Cissy Abrams and her mother with a shotgun.  Footer wonders if she is going crazy like her mother or if she was actually at the Abrams’ the night of the fire.  Susan Vaught captures the trials of coping with mental disease, family relationships and family services, and the impact of a traumatic event on a young mind through the innocence of an eleven year old.  Although Footer Davis Probably is Crazy lacks in development and tries to balance a bit too many sub-plots, this is an enjoyable read for middle grade students and provides students with a strong female protagonist.

Footer Davis reminded me of Sheila Turnage’s character, Mo LoBeau, from her Tupelo Landing series but is not nearly as well developed a character.  Vaught tries to cover too many issues in Footer Davis Probably is Crazy, and therefore loses focus.  I was expecting Footer to be as amusing as Mo, but she wasn’t.  Her questioning of everything is very realistic (and I loved the fear of Walruses), but the novel shifts too much which causes gaps in the story and some confusion at times.