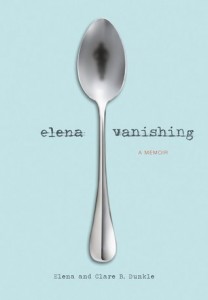 Elena Dunkle shares her harrowing battle with anorexia, which began to take hold shortly after she was raped while attending a German boarding school at age 13.  Dunkle struggled through multiple rehabilitation centers over five years after she was diagnosed at age 17, losing friends, dreams, and ultimately herself.  Her account is punctuated by the furious, obsessive voice anorexia took inside her mind.  Her inner voice constantly berates her, demanding perfection, but it is never satisfied.  So many times the reader may think Elena has hit her “rock bottom,” only to see her give up on treatment and increase her restriction and deception again.  An exploration of her past traumas is what finally convinces Elena to face her demons head-on.   An afterword underscores the gravity of eating disorders and recommends valuable resources for teens who may be exhibiting similar destructive behaviors.  Her mother, who co-wrote Elena’s memoir with her, also wrote Hope and Other Luxuries: A Mother’s Life with a Daughter’s Anorexia.  Pair the two to experience both women’s perspectives.  Recommend to students who enjoyed Laurie Halse Anderson’s Wintergirls and are looking for an authentic account.