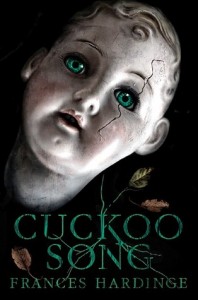 Hardinge, Frances.  Cuckoo Song. New York: Amulet, 2015. 978-1-4197-1480-1. $17.95. 416p. Gr. 6-12.
Triss’s family is struggling to recover from the devastating death of her brother during The Great War.  Tragedy nearly strikes again when Triss practically drowns in “The Grimmer” while vacationing with her family.  Their immediate return to town and the comforts of home provide a pithy interim when mystery materializes in the form of letters from her deceased brother, threats to the family from The Architect, and monetary demands from her brother’s ex-fiance, Violet.  Triss herself cannot fully comprehend her own changes, dirt and dead leaves on her floor and in her hairbrush, the undeniable hatred from her sister, Pen, and a voracious appetite that food alone will not gratify.  After an encounter with an eccentric tailor, Triss’s life is suddenly in grave danger, and she discovers a surprising ally in Pen and a solicitous confidant in Violet.  The only way to save herself is to find out what happened at “The Grimmer” and to the true Triss.  She embarks on an adventure that takes her into the underbelly of the city, into a secret and forbidden community and has her face a formidable enemy willing to do anything to save himself and his community.
Magical promises, unlikely bonds, and dubious alliances keep readers guessing until the final page.  Vivid language and complex characters create a fantastical tale comparable to classic folklore.
Historical Fiction (Supernatural)                    Christine Massey, JWP Middle School 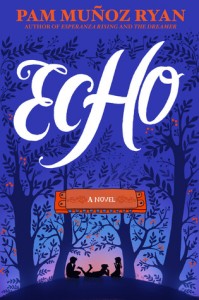 Ryan, Pam Munõz. Echo. New York: Scholastic, 2015. 978-0-439-87402-1. $19.99. 585p. Gr. 5-8.
In the midst of a rousing game of hide-n-go seek, Otto finds himself lost in the middle of a dark, dubious forest.  Three young girls, sisters, come to his rescue, and in return he promises to help free their imprisoned souls.  Reunited with his family, Otto struggles to understand the peculiar quest and the remarkable harmonica placed in his possession.  Only decades later, three other young people find themselves entangled in the same story.  Friedrich, in Germany, discovers the same instrument hidden at work.  The music he plays is mellifluous and unprecedented.  With instrument in hand, somehow he must overcome family secrets and save his father from a work camp in the middle of World War II.  Ivy, in California, receives the charming harmonica next and looks forward to playing a school solo on the radio when the family is suddenly uprooted from their home and relocated so her dad can take a promising new job and the family may have an auspicious future.  Faced with racism and Japanese internment camps, Ivy hopes the music she plays will provide solace to her family and safely bring her brother home from the war.  Mike, in Pennsylvania, is next in line for the instrument.  As he and his brother leave a boys home for a new foster family, Mike hopes the harmonica will provide a secure, safe future for himself and his brother, even if that means they must be separated in the process.
Each page is riddled with secrets and intrigue as the characters face daunting challenges and attempt to emerge triumphant in the midst of danger.  The three stories merge together in a riveting conclusion, drawing the reader in with bated breath.  A unique blend of historical fiction and magic, Ryan has succeeded in creating a masterful, harmonious story.  Readers will be caught up in the beauty of music, family, and sacrifice.
Historical Fiction                        Christine Massey, JWP Middle School

Echo is the story of three tragic tales intertwined through the voice of a harmonica. The harmonica is introduced to the reader in the beginning of the novel, and it is continued throughout three stories of youth.  In the first tale, Friedrich is a boy growing up in Nazi Germany in 1933.  Hitler has risen to power, and the constant threat of persecution is real and ever present Friedrich, his father, and his Uncle Gunther.  After a school situation, due to a birthmark on his face, Friedrich’s father removes him from school to avoid further bullying. Friedrich then joins his father at the music factory where he helps manufacture musical instruments.  When impending danger threatens the family, Friedrich is faced with the challenges of keeping the family together and saving his father. The story follows the harmonica to Mike in Pennsylvania where he is a ward of the state after his grandmother gives custody of him and his brother to a group home, Mike and his brother rely on their musical skills in the hope of having an opportunity at family life. The journey then leads to Ivy, a girl who is gifted at the harmonica and is asked by a radio station to perform on the air. Before she performs, her father makes a pivotal decision to move the family to a farm where a Japanese family has been deported to an internment camp.  They will take over their farm until the return of the family. The final part of the book details how the harmonica and music bring the three together.

Echo is written as a beautiful historical fiction tale. In each story, the characters and the harmonica depict life for people throughout the turmoil of World War II.  In Friedrich’s story, we learn of the persecution of those with disabilities and opposition to Hitler’s ideals and principles.  Mike and his brother are given up by their grandmother in the face of The Great Depression and pre-war preparation in America.  Finally, Ivy gives us the perspective of a girl who is recognizing the prejudice of Americans to that of Japanese Americans and Mexican Americans.  This book is one that will teach perspective and the way in which families are tied together no matter the distance or circumstance.  Each family tries to save what they view as their family.  The author uses characterization to build the connections the reader makes with the characters.  In each part ends with a cliffhanger.  It isn’t until the end of the novel that all three stories are tied together.  This is an amazing piece of historical fiction and perspective.