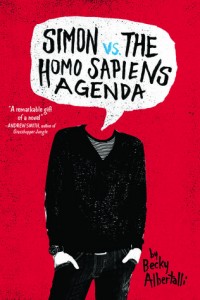 Simon Spier hasn’t exactly been hiding the fact that he’s gay, but he’s not ready to announce it yet either.  So, when a classmate spies him e-mailing a mystery boy he’s falling for, Simon is blackmailed into setting him up with a female friend.  Simon will do almost anything to protect “Blue,” his e-mail pal, who is more hesitant to come out.  (Why do only gay people have to come out?  “Straight people really should have to come out, and the more awkward it is, the better,” Blue writes while debating how to broach the subject with his parents.)  Simon longs to meet Blue in person, and their strings of flirty, funny e-mails will have readers rooting for that outcome too.  Simon is an endearing character with a slew of loving friends and family which makes his emotional journey easier than it may be for others.  The strong supporting cast is similar to that in Jenny Han’s To All the Boys books which pull the reader into a supportive circle, as idealistic as it might be.  This book is a solid addition to LGBT collections, but the sincere romance between Simon and Blue also makes it an easy pick for most readers.