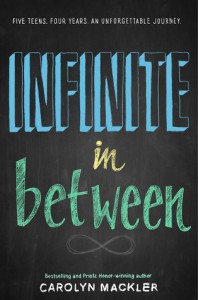 Five students who meet at freshmen orientation decide to write letters to their future selves, which they will open in four years when they graduate from high school.  Gregor is a band geek who longs for love and is faced with tragedy.  Mia is shy and focused on academics, while Whitney is pretty, popular and outgoing.  Jake used to be part of the popular crowd but has kept his distance since admitting he was gay.  Zoe, the daughter of a movie star, tries to fly under the radar as her famous mother publicly deals with alcoholism.  As time passes, each of these five students deals with his/her own issues as their lives intersect in unpredictable ways.  THOUGHTS: There is something in this book for everyone, as the characters are faced with common issues and scenarios that teenagers see regularly, such as underage drinking, the loss of a parent, divorce, teenage pregnancy, standardized testing and college applications, LGBT issues, and more.