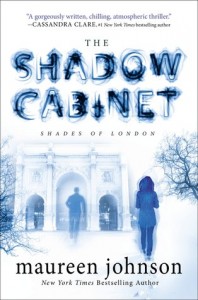 The Shadow Cabinet, Book 3 of Johnson’s Shades of London series, picks up where The Madness Underneath ended.  Stephen is dead; Charlotte is dead; Callum has run off, and Rory is trying to figure out what has happened.  Rory is determined to find Stephen’s ghost, but since she is still supposed to be missing, Thorpe, the group’s new head, refuses to allow her to search.  Instead she is to remain unseen, but, per usual Rory, she can’t do that.  Instead, she follows a lead to Highgate Cemetery.  With that lead literally dead, Rory, Jerome, her ex-boyfriend, and new team member, Freddie Sellars, begin to follow clues surrounding Jane, Rory and Charlotte’s therapist (and kidnapper) and the cult-ish past with siblings Sid and Sadie Smithfield-Wyatt who supposedly died in 1973, along with their followers; all except Jane.  As the team searches for clues, Charlotte, and Jane, they realize that more than just ghost hunting is at stake; black magic is ruling this investigation and only Rory can save Stephen, but at what cost.  THOUGHTS:  This is a fabulous murder-mystery story, with a bit of paranormal thrown in for good measure.  It may be the best volume of the series thus far.