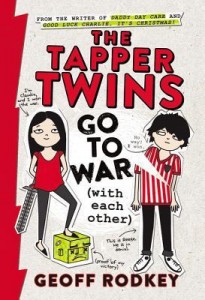 Battle-lines have been drawn and war has broken out–not between nations, but between two twelve-year-old twins!  Claudia and Reese Tapper are like most siblings, while they love each other, the do have periods where they just don’t get along.  One such time is related in this novel which is constructed and told via an oral-history type of format, incorporating interview transcripts, texts, photos, screenshots, and illustrations.  When Reese says something unflattering about Claudia in front of their classmates, Claudia vows revenge.  Some of the pranks attempted by Claudia include hiding a dead fish in Reese’s backpack and tricking Reese into getting a mohawk haircut.  Soon an all-out prank war has broken out between the siblings, dragging their parents and friends into the fray.  When Claudia’s early attempts at revenge fall flat, she decides to use some special intel to anonymously battle Reese in his favorite online game.  This ultimately results in Claudia’s suspension from school.  In an attempt to explain the events surrounding her suspension, she decides to write an oral history; the result of which is The Tapper Twins go to War.  THOUGHTS:  This humorous tale (and projected first book in a series) is sure to be a hit with students.  The oral-history format of the story is engaging and helps the reader gain insight into the cast of characters populating the novel.  Readers with siblings will find not only the “war” between the siblings relatable, but will also relate to the friendship and love underpinning the twins relationship.