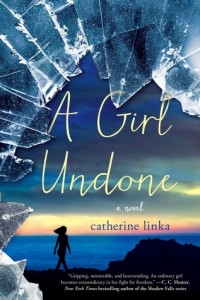 A Girl Undone, by Catherine Linka, is just as action-packed and fast-paced as its predecessor, A Girl Called Fearless.  In a time when the United States government has made more irreparable mistakes than they would like to admit, women are bought and sold like livestock.  The men with the most money have the best prospects for wives including Jesop Hawkins, California gubernatorial hopeful.   Hawkins has contracted Aveline Reveare to be his future wife, but Avie is now a fugitive and suspected terrorist.  After living in Salvation, a remote Idaho compound, she is forced to leave her longtime boyfriend  in order to save her own life and the secrets entrusted to her by Maggie, a leader in the anti-government organization.  When Avie’s identity is discovered, she is swiftly returned to Hawkins’ estate where she is closely guarded until her wedding day. The Exodus organization  is stronger than Avie ever imagines, and she learns that she too is stronger than she knows.  THOUGHTS:  It has the appeal of a realistic dystopian that will hook readers and a fast-pace that will keep the readers reading.