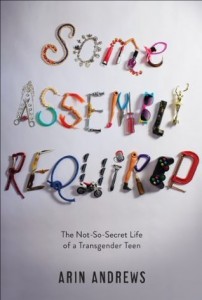 Arin’s memoir traces his struggles with gender dysphoria and eventual transition from female to male.  Arin, born Emerald, felt from a young age that he was born in the wrong body.  As he began to develop as a female, he became depressed and suicidal.  It wasn’t until he saw a first-person YouTube video about a transgender person that Arin realized what he was experiencing.  He began attending an LGBT support group and met Katie Hill, a teen who was transitioning from male to female.  Their relationship highs and lows played a large role in Arin’s journey.  Although Arin’s mom was not 100% supportive at first, she ultimately learned to accept him for who he is.  Not all transgender teens are lucky enough to have family and friends as supportive as Arin’s, which he acknowledges.  A list of resources in the back is essential to teens in isolated small towns such as Arin’s.  This book is a strong addition to any memoir collection: All teens will gain compassion for the struggles of the transgender community, and teens who are transgender will find strength in Arin’s moving story.  Pair with Katie’s memoir (Rethinking Normal), which also touches on her relationship with Arin.