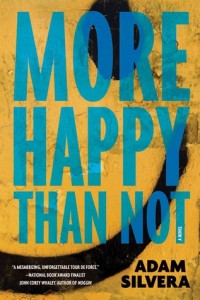 Bronx teen Aaron Soto has had a tough year by any measure. First his father committed suicide, and then Aaron tried to kill himself in a self-described “cry for help.” Now his girlfriend Genevieve, who stood by him through it all, has left for a summer art program in New Orleans. Aaron strikes up a tight new friendship with a neighborhood kid named Thomas, a welcome distraction from missing Genevieve and the ever-present smiling scar on his wrist. By the time Genevieve returns home, Aaron has begun to question his feelings for both his girlfriend and his new best friend. Distraught over the eventual realization that he is gay, Aaron signs up for a mind alteration procedure with the Leteo Institute, which promises a surgical alternative to painful memories and unpleasant realities (think of Eternal Sunshine of the Spotless Mind). But a hate crime triggers an ingenious plot twist that elevates this seemingly standard coming-of-age and coming out narrative into the “unforgettable” category. THOUGHTS:With More Happy Than Not, debut author Adam Silvera delivers a kick to the head, the heart, and the gut with equal aplomb.
Realistic, Sci-Fi            Amy V. Pickett, Ridley High School
Do note that the novel also offers a very frank depiction of teenage dialogue and sexuality (both gay and straight). In other words, f-bombs of every context appear throughout the book. While this adds to the realism, it might be too much for some readers, and would make playing an audiobook excerpt inadvisable. Nonetheless, at its core, this is a love story.