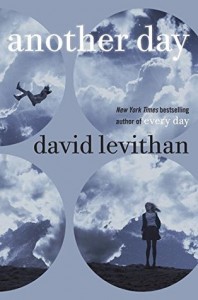 This companion novel to Levitan’s memorably unique Every Day (2012) is strong enough to stand on its own.  Rhiannon’s rocky relationship with her boyfriend, Justin, miraculously improves one day when the two spontaneously take a trip to the beach.  She’s puzzled and sad when Justin returns to his normal, moody self the next day; how could he be such a different person for one day?  The answer arrives when A officially introduces him/herself to her: A wakes up in a different body every day, and on that magical day s/he was in Justin’s body.  As Rhiannon tries to wrap her head around this seemingly impossible idea, she begins to fall for A, whose devotion to Rhiannon is solid despite his fluid state.  Readers will be hoping Rhiannon extracts herself from Justin’s hold on her, which is so obviously bad for her self-esteem.  This book explores the same identity questions in Every Day, such as how much does appearance matter if personality shines through?  Rhiannon’s point of view is one readers can more easily latch onto, especially as she ponders her relationship with A as s/he switches back and forth between male and female bodies.  The ending leaves hope for a sequel; a third book that converges the simultaneous storylines would be welcome, similar to Susan Beth Pfeffer’s Life As We Knew It and The Dead and the Gone converging in This World We Live In.  THOUGHTS:  I preferred A’s perspective as the narrator of Every Day, but Another Day was worth the read despite the slower pace.  Students who prefer the drama of romance would likely gravitate toward Another Day; students who would rather put themselves in A’s unpredictable shoes would enjoy Every Day more.  Recommend the two accordingly or as a pair.