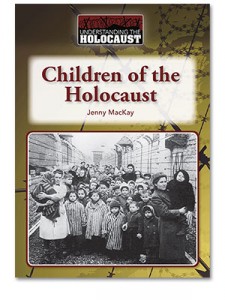 Each title in Understanding the Holocaust, Reference Point Press’ new seven-book series for teen researchers, explores a different aspect of the Holocaust in depth. Children of the Holocaust by Jenny MacKay, for example, covers children in hiding, children in captivity, the killing of children, liberation, and growing up in the shadow of the Holocaust. Each book opens with a useful timeline of important dates in Holocaust history, which contextualizes the events described in the following chapters. These extremely well-written, well-organized books incorporate quotes from survivors and eyewitnesses, photographs, and sidebars on pertinent topics such as “Starvation’s Lifelong Victims.” The various authors cover these subjects in a manner that is both respectful of the Holocaust’s victims and appropriate to the intended audience. Nonetheless, some of the text and photographs are inevitably disturbing, particularly in Holocaust Camps and Killing Centers and Hitler’s Final Solution, and these particular volumes may not be the best options for introductory research on the topic. THOUGHTS: While countless resources on the Holocaust exist, because these are some of the most heavily used items in many high school libraries, there is always room on library shelves for a strong new series such as this one.