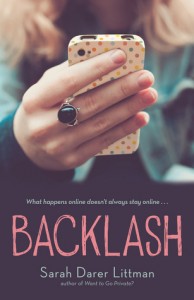 Littman tackles the topic of cyberbullying via the perspectives of four teenagers, Lara, her sister Sydney, Bree, and her brother Liam.  The story opens in the present.  Things are finally looking up for high school sophomore Lara.  She’s become more confident and involved in school activities since battling depression in the years prior.  She’s even landed a boyfriend online.  She hasn’t met Christian, but she knows he is going to ask her to homecoming.  She is shocked when Christian publically posts horrible things about her online.  Lara soon spirals downward and sees suicide as the only option.  Found in time, she is rushed to the hospital.  The story then flashes back to two months prior.  Seamlessly moving between the perspective of the four teens, the reader learns what lies at the root of the cyberbullying situation (Bree’s jealousy of Lara), and also learns how younger siblings Sydney and Liam are affected by what occurs.  The consequences of cyberbullying (for both the bullied and bullier) are also addressed when the truth is revealed; Bree created “Christian” to cyberbully Lara.  THOUGHTS: This novel will spark conversation and cause readers to reflect on the actions of the various characters within the story.  Be aware (per the summary above) that the novel does contain an attempted suicide as well as scenes with a severely depressed Lara.