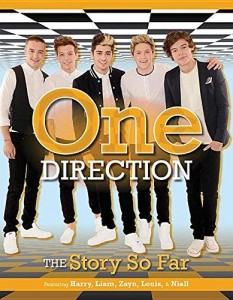 One television show was able to bring five boys together, each with a dream to make it in the music business, and create one of the biggest music sensations Simon Cowell could have envisioned.  The Story so Far beings with an individual biography of each band member.  Directioners will read about family life, siblings, struggles, sports and interesting trivia that makes each boy unique.  Their story reveals how they auditioned for The X Factor and were given a matter of minutes to decide if they would continue in the competition as a group.  As their success grew, they began writing new music and performing across the country and eventually the world.  The book adds “Fact Files” on each band member that include ambition(s), nickname(s) and best friends(s) that fans will devour.  The last two sections of the book focus on “Quotes and Trivia” and a Quick Quiz with answers revealed at the bottom.  Filled with a variety of colored photos, including full-page layouts, Directioners will feast on the story behind their favorite boy band.  THOUGHTS:  While the writing itself lacks high literary quality, the story chronicles how these young artists, who dedicated themselves to the show and their music, continued to stay true to themselves and their loyal fanbase.