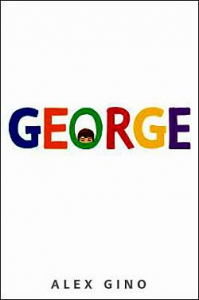 George took Girl’s Life magazine from the recycling in the library. Older brother Scott is a freshman in high school and is happy when he believes his brother is growing up and reading “dirty” magazines. George practices for the tryout of the fourth grade play “Charlotte’s Web” with Kelly only to have the  teacher find  it a joke when a boy tries out for Charlotte the spider and thinks it will confuse the audience. At home, George is dishonest with his mother, stating that he did not try out because it was too much to memorize. The next day at school his teacher shares that his audition took her by surprise and too many of the female students desire the role of Charlotte, but she offers George the role of either Wilbur, any male roles, or the narrator. George does not accept. Kelly gets cast as Charlotte which secretly makes George unhappy. Kelly consoles George when the classroom boys mock him and call him a girl. When George returns home, mom removes the Girl’s Life magazines and tells George not to go into her closet.  When playing Mario Kart with his brother, Scott, George wants to be the princess but selects the next best: Toad. After a week of not talking, Kelly apologizes and asks gently if George is transgender. George shares that transgender people do not have all of the same rights. Kelly secretly gives George the role of Charlotte for the afternoon performance. Scott and George’s mother are accepting of his personal feelings. Kelly also accepts George as a girl, and they agree to have George go by the name Melissa. Together they try on dress clothes and go with her uncle on a trip to the Bronx Zoo.  This novel received a Stonewall Book Honor in 2016. THOUGHTS:  George is in fourth grade during the book. While George is younger than middle school student readers, having this book available would be advantageous for students.