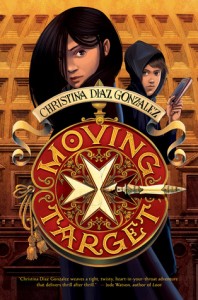 Living in Rome began to feel ordinary and even boring for 8th grader Cassie. This feeling changes after her Papi, an art historian, hugs her and says they must leave for safety, and shortly after, her father is shot. As Papi is in pain, Cassie learns of a secret organization that is after her, and she is advised to trust no one and go to see Brother Gregorio. Cassie wishes also to seek the help of her best friend, Simone. There is a Spear of Destiny that has been around for thousands of years that creates a power struggle. They are given a ring of protection to wear. There they meet Asher, nephew to Gregorio. Cassie has a difficult time convincing Simone to get rid of her cellphone as others could be tracing their moves with the device. Next they face a riddle regarding the dying town and escape the half-ear man. The end of the book contains many turns in the plot. THOUGHTS: Readers that begin the journey with Moving Target will be ready to join the lead characters in the forthcoming book of the series, Return Fire (Scholastic, 2016).