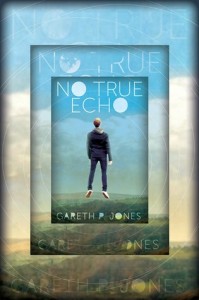 Eddie Dane has always thought he lived in the most boring town in England.  Life in Wellcome Valley is predictable, until the day that Scarlett White arrives in town.  Scarlett is enigmatic.  Though she reveals little about herself, she seems wise beyond her years and exhibits an unusual curiosity in the town and its residents.  Enamored (and curious), Eddie follows Scarlett one morning to the farmhouse of a reclusive scientist where he witnesses a murder.  The next time he opens his eyes, Eddie finds himself back on the school bus the day Scarlett first arrived in town.  Eddie soon discovers he is stuck in a time loop in which he regularly “echo jumps” back to the day Scarlett arrived in town.  Each iteration of the loop is somewhat different, and Eddie struggles to determine what the truth is and who he should trust.  THOUGHTS:  This science fiction time travelling story will engage readers with twists, turns, and surprising revelations.  The ethics of time travel and changing history are also worked into the storyline.  While the parallel time lines and loops may get slightly confusing at times, Eddie is such a likeable character that readers will relate to his confusion as he struggles to understand this concept as well.