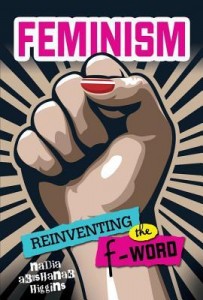 The bold cover of Feminism by Nadia Abushanab Higgins first drew my attention to the book, and I’m so glad that it did! This highly readable nonfiction title opens with a chapter on the three waves of feminism: the 1848-1920 fight for suffrage and other basic rights for women, the mid-20th century second wave that roughly coincided with the Civil Rights movement, and the ongoing “Third Wave.” Beginning in the early 1990s, this Third Wave kicked off with a combination of the previous movements’ wisdom and a thoroughly modern perspective on individuality, power, privilege, and femininity. Higgins then moves on to how things stand in the realms of work, violence against women, sex and beauty, reproductive rights, and the future of the movement. Higgins does not shy away from regrettable chapters in feminist history, such as the failure of white feminists to vigorously protest forced sterilization procedures in the United States. She also has a clearly Pro-Choice position on abortion rights. Excerpts from the book would work well in curriculum areas such as American History and Sociology. The book also serves as a starting point for building a multimedia library of feminist documents, books, images, and video. THOUGHTS: Kudos to Nadia Abushanab Higgins for creating this nonfiction book for teens that has tremendous value for researchers and browsers alike.

COMMENTARY: I plan to include Feminism in the “Notable Nonfiction” read-alike list that is featured on the Ridley High School Library’s Web site (http://www.ridleysd.org/Page/5897) , as well as incorporating it into my booktalk repertoire. For an even more in-depth discussion of the terrible history of eugenics and forced sterilization, listen to the Fresh Air interview with Adam Cohen, author of the recently published Imbeciles.